Jacquie says that Duplicity by A.E. Madsen is a good debut with some interesting characters: 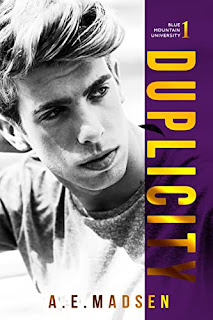 Duplicity
Blue Mountain University Book 1
Daniel
When my ex outed me, he also lied about our relationship, and everything changed. Now, I’ve been effectively disowned by my parents, and I haven’t dated anyone in almost nine months since. According to my friend, that’s too much time to waste regretting the actions of a good for nothing jerk. Part of me wants to get back out there, but I’m not sure. She insists on setting me up on a semi blind date with her old study buddy. But when I run into him on campus, he isn’t anything like she said.
Ian
I can count the number of people that I’ve told I’m bi on one hand, make that one finger. I’ve never been the out and proud type. So, when Daniel approached me nervously asking about a date, I was a little surprised, but I was also on my way to soccer practice and had no time to think it through. I gave him my number so we could meet up later and we went on a date the next weekend. It was great, and he kissed me when we were saying goodbye. Then he called me Aiden. That’s my brother’s name. Did I forget to mention I’m a twin?
Jacquie's Review:
Although the focus of Duplicity was Ian and Daniel, all too often Liam, Aiden and Elliot stole the show from them.
The first half of the book went along well with the mix up. I'll admit to being frustrated with Ian not admitting the truth to Daniel.
However after the reveal the pacing dipped quite a bit and I struggled with it. Often I didn't feel an emotional connection to the characters or their relationship.
That being said, it was interesting with the side stories and it was sweet.
Told in dual POV with Vers characters. Check the CW for any triggers
Rating: 3.5 Stars
Red's Book Reads Review:
This is a new author for me but I enjoyed Duplicity. It’s a low angst story and fairly low steam but a sweet story of two college boys falling in love.
Daniel has been outed to his family who haven’t taken the news well. Ian is hiding his bisexuality as he is nervous of telling his soccer team. A case of mistaken identity let’s him be more open and embrace a potential relationship. I enjoyed the storyline and I really liked Daniel and felt for him over the struggles with his family. Ian was a little irritating for me and I found myself getting really frustrated with him at some points. This is definitely much lower on the steam scale than a lot of books I’ve read recently however it was really sweet all the same. On the whole an enjoyable book and I would read more from this author.
Rating: 4 Stars
3.5 stars 4 Stars Jacquie low angst low heat New Adult New Author Reds Book Reads Series University