Wowzers! I knew from the outset that Daddy's Stepstalker was going to be a dark book and having read and adored the Grimm Tales of Smokey Vale series I thought I knew what I was in for - boy was I wrong! 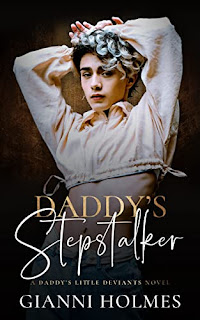 He’s been Daddy since he won me my first stuffie at a carnival booth.
Even when he married her and became unavailable.
For years Daddy Shaw’s all I’ve ever wanted.
But he still sees me as the innocent boy he took in.
It's a giggle how sweet he thinks I am.
He has no idea of the things I have done.
Of how I've stalked him…
...fantasized about him
... killed for him.
Will he still think of me as his little angel when he finds out I'm rotten to the core?
Red's Book Read's Review:

Daddy's Stepstalker was just phenomenal and I absolutely adored Ari and Shaw's relationship. I loved how Ari knew what he wanted and was determined he was going to have it. His single-minded focus on Shaw was so intense and it really made this into a much deeper story than I was expecting. I loved how Shaw became just as possessive over Ari and how he was determined to keep him safe.

Absolutely make sure you read the trigger warnings if you have any concerns as this is a much darker story than expected and there are some scenes that people might find triggering and there is definitely some dub-con amongst other things in this book. I was hooked from the start however and will be adding the rest of this series to my TBR as soon as I know they are coming!