Breaking His Serve by Christie Gordon

on January 21, 2022
Christie Gordon's newest offering is Breaking His Serve, an enemies to lovers, new adult sports romance with plenty of sweet and a fair amount of heat!
From the blurb: 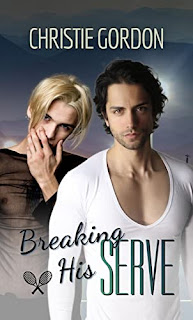 Chase is controlled. River is anything but. The two together, on and off the court, are a force to reckon with.
When Chase Rossi steps onto the tennis court for the first time in his senior year at college, he thinks his position at first singles is secure. Then River Adams shows up, with his boisterous attitude, bad-boy good looks and a quest to unseat him. Though Chase considers River an enemy, he can’t ignore a growing attraction to him.
River Adams has to make an abrupt change in his tennis career after his mother is diagnosed with cancer. Now the coach is pitting him against Chase, the hottest guy he’s ever seen, and the best part? The easy way he gets under Chase’s skin and rips him apart, on and off the court, in more ways than one.
As tempers flare and secrets are revealed, the two find their opposite personalities might be a perfect match. Chase is attracted to all the things he should hate about River—his ridiculous antics, his carefree attitude, and his competitive nature—and he knows falling for River could be the thing that does him in. River doesn’t think twice about jumping in with Chase. He knows Chase is a man who could become his rock if he plays his cards right, just when he needs one. As they realize they compliment each other in every way, can they both figure out how to give their hearts fully and find the love they deserve?
Trigger Warning: This book contains interactions with a drug-addicted, absent parent and another who is dying from cancer.
Heather's Review:
River is in your face, confident and trying to hide his pain at knowing his mom is dying of cancer... Chase thought he was sure of himself until River shows up to train with the university team and throws a huge spanner in the works....
This book had a good balance of tension, heat, sweet and angst... there was just one part that took me out of the story, but that could easily have been me... otherwise the pacing, heat and sweet were all on point!
If you like a college/new adult romance with some opposites attract, enemies to lovers, coming out and first times steaminess, than you'll love Breaking His Serve by Christie Gordon.
Rating: 4.5 Stars
4.5 stars Coming Out Enemies to Lovers Heather Hurt/Comfort sports steamy sweet Tennis Trigger Warning