Humans and super naturals galore appear in the epic Thicker Than Water collection on Audiobook. 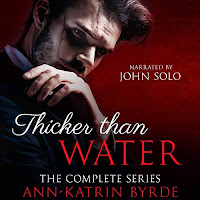 Love bites are the best bites
Collin didn't think vampires were real - until he met Talon. Talon's fangs are razor sharp, and his touch feels like destiny. He makes Collin's knees go weak and his brain go soft. When Talon bites him, Collin forgets everything - even that Talon's coven wants him dead. Him and his adopted siblings. It's something about those birth marks they share, something about a prophecy.
Something about their heritage.
Collin doesn't know anything about this mystery yet, but he's going to find out - and he's going to have to fight for his love, and his life.
The Thicker Than Water series bundle consists of four full novels, each following one of four brothers as they fall in love with their vampire mates. Themes include friends-to-lovers, bi awakening, bites that induce mind-blowing pleasure, vampires who kill, forging your own family and light MPreg elements.

I listened to this excellent series bundle by Ann-Katrin as an audiobook over a longer period of time. It was an epic 36+ hours. That is why appreciated the recap of the highlights at the start of each individual book so much . I am not always a fan of John Solo's narration work, but in this series I found it spot on and he brought the characters even more to live.

If you like vampires, witches and a cross of them dampirs , great find, Thicker Than Water is your jam. It tells the how, the what and when and how it all came to be. I don't want to give much away but it ways a new perspective on some of the Supernaturals mentioned for me. Oh and not to forget on the sideline there are cute dampir babies born as well. Thicker Than Water is mm bi/pan  and MPreg all set in a weird and wonderful world.

So much more can be told but that would spoil the plot.