#ThrowbackThursday - When I First Saw Red by Kasia Bacon 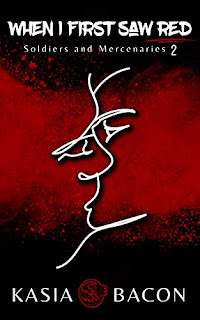 Lázhien’s human. A common Imperial soldier. And my soulmate.

How could fate get it so wrong?

The demon in me craves this bond with every shred of his being. He pushes me to accept it.

This time I won’t yield to his demands.

Red’s a lust demon, a whore and a stuck-up snob.

The most beautiful man I’ve ever seen. Pain in the arse. And he hates my guts.

I’d be an idiot to pursue him. Yet something about him compels me to make him mine.

When I First Saw Red is a complete and standalone short novel with enemies-to-lovers, an HEA ending, featuring a couple of reluctant fated soulmates—a demon and a human—trying and failing to defy destiny.

A common human. A soldier, gods have mercy, as big and strong as an ox, and likely just as witless. A crass simpleton, with a penchant for violence, perhaps, considering his enormous size and mean countenance to match.

Black spots danced before my eyes, so I squeezed them shut. Immediately, an image of the man’s powerful arms and broad shoulders assaulted my mind. Seated at the bar, he seemed to own the place, looming over squirrel-sized Ranélle like a thug. A very attractive thug, whose dark and dangerous allure made me hard, wanton and exasperated. All against my will. Lifting my eyelids did nothing to eradicate the memory of his fervid, sooty gaze or his masculine, rough-hewn features. They’d imprinted themselves on the back of my eyeballs.

Oh, he would be back, of that I had no doubt— the hex that had hit me would be affecting him as well. I could’ve done without the irritating excitement that spread tingles across my abdomen. Despite hating the idea of meeting the human, I already longed to see him again.

It felt a little like unfair punishment and a lot like the irony of fate. What could I possibly have in common with a crude army lad? Me, an opposer of the military and everything to do with it? An enthusiast of fine arts, sophisticated conversation, and good wine?

My jaw tightened as a surge of anger jolted through me. Of all the pleasure houses in the Western Empire, why did he have to stumble into mine? Our street alone housed three other brothels, for the gods’ sake. The cheek of him, barging in here, all because he fancied a shag. Without a shred of awareness, he had set in motion something that threatened the way I’d lived and liked my life.

I’d earned my silver by steadily fucking through the upper crust of Nygläär. The nobles honoured my extortionate fees without as much as an arched eyebrow. Did I mind that they made a fetish of my rare background? Did I, fuck. I simply charged an arm and a leg for the privilege of my company. Coin, although essential in providing me with the luxuries I’d grown accustomed to indulging in, wasn’t my sole objective.

My profession complemented my nature. It satisfied the fundamental demand issued by my blood. The unquenchable Incubus in me revelled in carnal pleasure and debauchery. He thrived on promiscuity and seduction, never ceasing to chase after yet another conquest. In plain words— not only did I enjoy fucking, but I had a physical need to frequently engage with multiple partners to keep my demon sated and controlled. And that, in turn, allowed me to remain sane, balanced and relatively content.

The very presence of the brawny soldier downstairs put my hard-won sanity, integrity and contentment in jeopardy. Because the oaf at the bar, currently doing his best to drink himself unconscious, was my soulmate, and my demon wanted to jump his big bones with a vehemence that knocked the wind out of me.

Doesn't this just look amazing?  Add When I First Saw Red to your TBR today or to your Audiobook Queue!