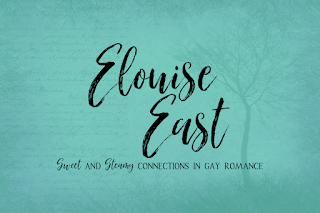 I am working my way through a few authors backlists and Elouise East is making it easier by bundling the Crush series into box sets and I'll be diving in and reviewing the first one shortly... but for now, let's spend a little time getting to know more about the author herself!
I also have to apologize to her, since I've had this interview sitting in limbo for a while now and it got lost in the shuffle... so before I lose it again let's jump into the questions:
Plot or Pants?  Do you pre-plot your books, use an outline, fly by the seat of your pants or some combination of things?  How do you keep track of characters in a series?  Do you keep a journal of your characters statistics, such as hair and eye color, relatives, hometown, etc.

I am very much a pantser. I have found something that has worked for me which is a bit of a mix between just writing whatever happens and planning the story. When I first have an idea about a book, I will write out all the details about the characters that I know, this could be their physical description; any tells they may have, like biting their lip; their age, job description and any previous jobs if its notable; whether they drink tea or coffee; and any other tidbits that they might tell me.
The actual writing process is similar for all books I write. As I began to write, I just let my fingers go. If the characters cooperate, I can easily get through a chapter a day, sometimes more. If any information crops up as I’m going, I’ll note it down in my notebook, but I basically just let my fingers do the work until I have finished my allotted word count for the day, or I have finished the thoughts in my head.
As for keeping track, I use several things. I have a spreadsheet which I keep with details about each character description (I also do this on paper when I write out their details) and a timeline of when events happened. I also have a list of what names I’m using within the series. I write out the alphabet and try not to use too many names starting with the same letter throughout the series. I made that mistake in my first series and found I like the letter A, C, J and M.

My first published book was called First Kiss and is the first in the Crush series. I began writing this when a friend I had been beta reading for told me to go for it. I’d had an idea for a scene which had been circling my head for months, but I’d never written it down. So after that, I did, and it ended up being a scene about a third of the way through the book. The book itself was written within a month and published a month later.  In hindsight, I should’ve taken more time with it, but I was so excited I just went with it. I’ve always loved the taboo side of stories, and that is what it turned out to be but with a twist. I won’t spoil it. It was supposed to have been a standalone but the characters spoke and I ended up doing a whole series about the group of friends.

My most recent book is Rogue Royal. I saw a cover I loved and it sparked an idea that curved and changed into something entirely new. I knew from the minute I saw the cover that it wouldn’t be a standalone so I had several more covers commissioned. Rogue Royal follows a fictional royal family who own and run a BDSM club. They are behind the times in some aspects of their thoughts and practises but the younger generation are bringing them into the light, so to speak. Things will be changing throughout the series and the club will (hopefully) become a more well-rounded place to be. Prince Douglas is always receiving media attention, unfortunately, and giving his social media manager a nightmare to deal with, but things change when Douglas realises Mav is worth his weight in gold.
Side note from Heather - Secretive Royal, the second book in the series has also been published, as well as two books in the Love in Flames series: Out of the Frying Pan and Smokescreen... I accidently misplaced the interview and apologize profusely for the delay in sharing it with you!
Do you write full time or part-time?

The pandemic has changed my life. Before, I was working as a nursery assistant, which I didn’t really enjoy. I couldn’t see a way to get out of the job, though, because that was where my experience was. When the lockdown happened, I lost my job and as a single parent, that was super scary. I had started writing part time the previous year, and I realized the lockdown had given me the opportunity to write full time (around homeschooling two kids!). By the end of last year, I was making enough money that I didn’t have to go out and find another job. I was doing something I LOVED! It has made the world of difference to our family life as well because I have been able to spend more time with my kids instead of leaving them at after school clubs.

Max and Casey. I know you said one character, but those two just don’t want to leave me alone, lol. Casey had featured heavily in the Crush series since book 4 where he was a side character, and Max has been in the series since the beginning. Max’s book was book 3 and Casey’s book 6, but even now, they want their time in the limelight. Casey is more pushy, and is already featured in one of my new series which is set in the same town as the Crush series.

I have a desk in my bedroom as I don’t have space anywhere else. My routine consists of getting the kids to school, then sitting down the moment I get home to write. Personally, I find I need to get the most important tasks from my to do list done first, then I can write as much as possible. I try to complete at least 3k words a day, or a chapter, whichever works best for the story I’m writing. Once I’ve done my target, I’ll stop and have lunch, then if I have the ideas in my head, I’ll write again in the afternoon, or if not, I’ll set about admin tasks. Then I’ll pick the kids up and spend time with them. When the youngest goes to bed, I’ll sit in front of the computer again and do either admin, writing or editing, whatever is most important at that moment.

I already have my release schedule penciled in for next year. My plan is to release a book every two months at least, but there will be other releases in between, for example, anthology stories, taboo books (by my alter ego Elouise R East), etc. My main schedule is for the series books, so Club Royal and Love in Flames. Both should have three releases next year.
My overall plan is to find a balance between what is best for my business and what is best for my ability/home life. I can write books fast, but it’s not always the best thing to do for me. Finding that balance is what will make my life even better than it is now

What made you decide gay romance was the genre you wanted to write?

When I first decided to try my hand at writing, I thought I would write MF, but as the character developed, I realised my brain had automatically made them both guys. I wasn’t complaining because gay romance had been a genre I LOVED to read, but I hadn’t thought I’d be able to write it. In the end, I just wrote and what came out was my first book. So although it wasn’t what I’d planned to write, I believe it was what I was supposed to write.

Inspiration is all around me all the time. I couldn’t tell you exactly where I got it from because it would take too long, but imagine seeing a colour and knowing a character would love to wear that colour, or watching the rain work its way down a window and realising this is what a character would be doing when they felt a certain way. Images, music - Legendary Lovers by Katy Perry has a story floating through my head for years that I have yet to pen, but I will - conversations, other books. There are so many places where I can get inspiration from.

What is your favorite thing about writing gay romance?

The way that each character has their own story. Gay romance, for me, is being able to show men how they are, not how the world perceives them to be. Yes, men can be strong, but they can also be emotional, depressed, uncertain, flighty, angry, joyous, unstable, and many other emotions that the world sometimes doesn’t want them to believe they can be. I love showing the infinite possibilities of a male character. I love creating a world where they can overcome their pain by getting help from any and all places the real world might scoff at. This is just my opinion, though. But it’s the reason I love writing so much. My characters create their own worlds. I’m just their voice.

How can we find you?