Out of the Shadows by Ali Ryecart

Out of the Shadows is an interesting look at how snap judgements can lead to men becoming enemies with passion buried just below the surface... 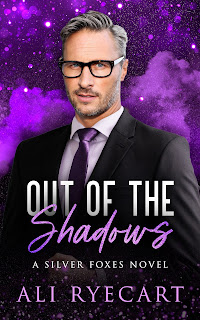 Two men. One explosive attraction. And the doubts and fears that could rip them apart forever.
Daniel
Firing Cosmo Stern was the best business decision I ever made. Cocky and over-confident, he was a walking disaster. Five years on, he’s the last man I want on my team when I’m hired to save a failing investment firm from collapse. Brash, infuriating and cocksure, he’s also the most captivating man I’ve ever met. But that means nothing. I have no interest in men. And none, absolutely none, in Cosmo Stern.
Cosmo
I’ve never forgiven Daniel Russo for almost wrecking my career, so when the man I loathe more than anybody walks into the office as my new boss, we both know there’s a storm coming. He’s still uptight, still so poker straight he’ll snap if he bends an inch, and still the hot and sexy silver fox I remember. When a blazing row leads to a burning kiss I’m left stunned, confused and wanting a whole lot more. But I’ve been a straight guy’s walk on the wild side before. It’s a road I’ve vowed never to walk again — for anybody.
Out of The Shadows is a steamy age gap workplace romance. Expect enemies to lovers, two men who can’t admit who or what they want, along with a dose of angst and friends who love and despair of them in equal measure.
Heather's Review:
Out of the Shadows was a slow burn, coming out story featuring men who thought they hated each other... Cosmo knows he's gay and is out and proud... Daniel, not so much... having always dated and even got engaged to a woman... the same woman who helps him see the potential in his attraction to Cosmo...
This book was an excellent read with good hooks and a wonderful storyline, but it was just a little bit long.  The characters really wanted to move at their own pace and it showed.
Rating: 4 Stars
4 Stars Age Gap Boss Enemies to Lovers Gay Awakening slow burn