As it is the season, Haven Holiday takes us back to the Haven Hotel to celebrate Christmas with Rick and the rest of the residents. You do need to have read the previous books in this series - or at least some of them - as this book picks up where they left off. 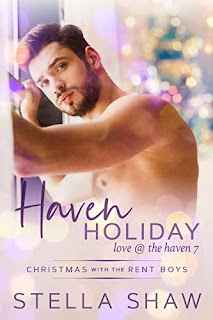 Sentimental discoveries, sexy men, a special performance - and badly-kept secrets. Is it the perfect Christmas at the Haven Hotel?
It’s the first Christmas at the Haven Hotel since Rick inherited it from his aunt, and he’s spent all year getting things back on track. When he and Eliot find a box of Auntie’s mementoes in the basement, highlighting a very unconventional theatrical career, he decides to hold a party to honour her. But there are way too many obstacles preventing him getting his friends together in one place, this close to Christmas. Or so everyone keeps telling him.
Rick loves his partner Eliot, and is very fond of his friends. But a man’s patience can only stretch so far. The day of Auntie’s birthday turns out to be a very confusing and distracting time for him—and everyone except him seems to be in on it. From covert meetings, to secret recipes, to mysteriously vanishing decorations, and even through a very hot but surprising seduction, Rick is led astray until the day is almost over.
And then his friends show another side of their meddling. Auntie Pop had love and respect from many of the escorts at the Haven, and it looks like her day will be fondly remembered after all. And Rick and Eliot may have the chance at last to make their own special commitment—that’s if Rick ever forgives all the subterfuge!
**this Christmas special is a self-contained story, but it features all the characters who live and work at the Haven, so it may be more fun if you've read the previous books**

I enjoyed Haven Holiday and loved finding out more about Aunt Pop and her life before the Haven. It was lovely to catch up with some of the previous characters as well and see how they were doing with their lives. On the whole, a really sweet seasonal story and a great next instalment in the series.

Since Haven Holiday is better read after the other books in the Love at the Haven Series and it's available on KU - why not start at the beginning with Dante: Love at the Haven and spend the holidays binging this amazing series!