on November 30, 2021
I have to apologize to Penelope Peters - she submitted her teaser long before Hands-On Hanukkah released and somehow we glitched and missed posting it... but the teaser is so scrumptious, I'm posting it today... and sharing this yummy excerpt with you!
The best part is that you can pick up your copy of Hands-On Hanukkah without having to pre-order!
From the Blurb: 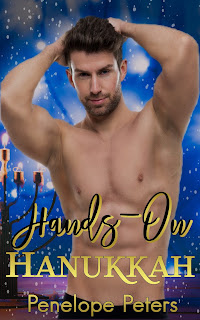 David Nachem is living his best life – despite not knowing why his ex-boyfriend up and dumped him four months ago. When Tim asks him for a little hands-on help before his big ballet debut, though, David can’t find it in him to say no. Not when he’s still half in love with Tim in the first place.
Tim Mason is living his dream – but when it’s nearly derailed by an old injury, only David’s healing hands can help get him back in the spotlight. But can Tim forget what split them up in the first place – or find a way to forget what those massages might mean?
This Hanukkah, all it takes to heal a heart is a pair of willing hands…
Exclusive Excerpt:

(After a rather intimate massage, Tim has joined David in his upstairs apartment, theoretically to light Hanukkah candles. Well, they do that too. Unfortunately, kissing isn’t the only thing their mouths end up doing…)

David glanced down at the prayer book and found the words—not that he needed them, really, but he liked having it there. David used the shamash to light each of the other candles, murmuring the prayers under his breath. The flames flickered, reflecting against the window panes, tiny orange lights dancing against the darkness outside.

Their faces, glowing in the glass, Tim’s soft smile as he gazed at the candles, everything around them in shadow. The flames danced in Tim’s eyes, bright and cheerful, and he leaned in against David, warm and soft and smelling so much like he belonged.

It was only them, only then, a single moment suspended in time, and David didn’t want to breathe lest the moment end.

“They’re so pretty,” breathed Tim. “I bet it’s even better on the last night. With snow coming down?”

Tim looked up at him, smiling widely. “I wish—""

It was a terrible idea. He knew it even as he did it—but Tim’s mouth opened under his, and he reached up to wrap his arms around David’s neck, exactly the way he’d always done when they kissed over the summer.

David tasted himself on Tim’s mouth; it wouldn’t take much to make him hard again. To ease the t-shirt off Tim’s body, push him into the bedroom and onto the bed, to return the favor…

David broke off the kiss, breathing hard. It was a terrible idea, to stop kissing Tim, but Tim didn’t resist when David pulled his mouth away. He didn’t move out of David’s arms, either, though—and if that didn’t give David hope, nothing would.

“I can’t,” whispered Tim, breaking the kiss—but not stepping out of David’s arms. His chest rose and fell against David’s; he could feel it, almost pretended he could feel the way Tim’s heart pounded, too.

David could imagine Tim standing there, breathing, trembling… every emotion bare on his face. David didn’t dare open his eyes, not wanting to know if Tim was looking at him or not.

Tim sighed and rested his head against David’s chest. “I shouldn’t still want you,” he murmured. “It’s really not fair.”

Tim pushed away and turned his back to David. “It smells good in here,” he said, his voice shaking even as he tried to sound normal. “Garlic?”

David opened his eyes, the emptiness so much more acute than it’d been before Tim had stepped away. The candles flickered, reflecting in the dark window panes, and Tim might have been enamored with them before, but now he looked everywhere but at David. His lips still felt Tim’s under his, but…

“Yeah, aglio e olio,” said David. “There should be enough for two—”

“I really have to get going—”

David took a step closer to Tim. And then another, until he was almost in arm’s length. “We need to talk.”

Tim took a step away. He seemed nervous. “What, because I don’t want your dinner? I’ve got a dress rehearsal in less than an hour, if I eat pasta now I’d probably throw up in the middle of a tour jeté.”

“I don’t care about dinner. I’m talking about why your therapy session went awry.”

“Who said that was sex?” said Tim, his voice going high-pitched. “That was a hand-job. Blow job. Just jobs. No sex.”

“Call it whatever you want to call it,” said Tim, still not looking at David. “That’s how they always end, right?”

“Not usually, no,” said David coolly. “I don’t have sex with my patients.”

David sighed. “Okay, look, I know you hate me, but if I’m seeing you as a therapist, then you’re—”

Tim’s shocked expression couldn’t have surprised David more. “You think I hate you?”

The timer in the kitchen went off; the pasta was done. The garlic would be done, too.

But Tim blocked the way, and he looked so confused that David felt stupid for the daydream he’d had by the window. The kiss he’d started without even thinking.

“Forget it,” he muttered, walking past Tim, because staring at Tim’s face was ice water in his veins. Sure enough, the garlic was sizzling and a shade too brown already. David quickly removed the pan from the heat before it could burn.

“What the—David!” Tim followed David into the kitchen. “You don’t get to drop something like that and then walk away.”

“You think that was—you know what, you’re right. Forget it. Whatever.”

“It was an odd position, though, so if you’re sore tomorrow—”

“I’m dancing tonight. If I’m sore tomorrow, that’ll be why.”

Silence again. “Your fault. I gave you a blow job—and it’s your fault.”

David tried not to wince. “I meant the position you were in.”

“Uh-huh. Pretty sure I’m the one who put myself in that position, you know.” Tim sounded bitter. David had a momentary thought that Tim wasn’t talking about the blow job, or the possibility of being sore. “I gotta go, I’ll be late for the dress rehearsal.”

David squeezed his eyes shut and slammed his fist lightly on the counter.

Somewhere in the living room, Tim was already unlocking the door.

“He told you the truth, you know,” David called, hating every honest bone in his body.

Hands-On Hanukkah is available from multiple retailers in e-book form and in Paperback too!
books2read.com/HandsOnHanukkah