Tangled in Tinsel by Ellen Mint

on November 30, 2021
Tangled in Tinsel is a light-hearted, low angst Christmas story that definitely sets off Hallmark movie vibes...
From the Blurb: 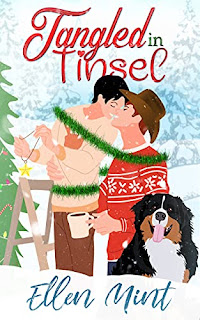 Dear Santa, please leave a red-headed lumberjack under the tree. I’ve been a very good boy.
Dean Hancock does not have time for the gorgeous, red-haired, cowboy lumberjack that nearly shattered his windshield with a Christmas tree. He’s on the hunt for a long-lost cradle carved by the artistic genius Gustav Gilt. After being lost for a hundred years, the antique appears five days before Christmas in the tiny town of Tinsel.
God has a wicked sense of humor.
On the verge of an academic and financial breakthrough, he doesn’t have time to ‘get friendly’ with the local cowboy Levi Bruce. If he hasn’t authenticated the manger in the middle of the town square before Christmas Eve, he’ll lose his antique shop and any dreams he had to find a real Gilt. But it won’t stop Dean fantasizing about his lumberjack riding in on a white horse and lassoing him just right.
Levi Bruce spends his days waking before dawn, tending his tree farm, going to bed after dark, and starting the cycle all over again. It’s a long, lonely life, but with his dog Harry at his side, he thought it was enough. Then that handsome, charming man from the city had to stroll in and upend everything. The wolves are at the door, a big company threatening to take his family farm out from under him. The last thing Levi needs is distracting dreams of kissing the delectable man under the mistletoe.
Will these two fools open their hearts by the fire of the farmhouse’s hearth? Or will the promise of millions, a family secret, and an eccentric artist’s masterpiece rip them apart forever?
Tangled in Tinsel was created in part thanks to my wonderful readers who voted on what they wanted to see in a Christmas romance. This gay, Hallmark-influenced romance is a heart-warming, hilarious, steamy mug of Christmas cocoa.
Heather's Review:
Tangled in Tinsel is a sweet holiday story with a few cute twists - it's not insta-love, which makes it different from so many of the other holiday stories, both characters have met before and there was a summer camp crush involved...
It is definitely low-angst and fairly low steam, fitting into that Hallmark, curl up with a hot cocoa vibe it was going for.  The writing was well done and I was able to read this story in one sitting.   I like the twists and the drama from the Gilt cradle.
If you are looking for a sweet story that lives up to it's Hallmark expectations than you'll love Tangled in Tinsel!
Rating: 4 Stars
4 Stars Christmas Heather holiday low angst slow burn sweet