on November 04, 2021
I'm addicted... to the subplot of the Club Royal series... the homophobic and subversive plot that began in Rogue Royal, continues in Secretive Royal and is just so compelling... on top of that you have another complete romance, this time featuring Henry and Robert...
The Blurb: 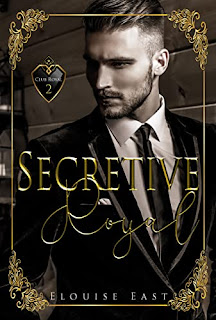 Henry is afraid. Many people want to see an end to the LGBTQ+ community, and while he pretends to be straight, he isn't. That isn’t his only secret. He wants to enjoy life by letting go of his human counterpart and becoming Dusty, a pup with nothing to lose. But his family would accept that part of him even less. After hiding for so long, all it takes is one chance encounter with a gorgeous florist to send his normal existence into disarray.
Robert takes everyone's preconceived notions and throws them out of the window. He’s a Dominant, he wears makeup and jewellery, he owns a business, and he loves being a handler for pups. Problem is no one takes him seriously because of how he looks. Past partners laughed at him after he'd given them his heart, so he stopped trying. Why bother?
When they meet, sparks fly and neither can understand nor break the link holding them together, but someone is set on outing the prince.
Who can help them change decades of rules in time to save the descendant and his handler?
Heather's Review:
Okay, I already gushed over the running subplot, so I guess I should talk about the main story in Secretive Royal... Henry and Robert are amazing together!  From the initial meeting to their different run ins, you can see the interest bubbling just beneath the surface!  I love how, since Robert is the dominant force in the relationship, it's on him to move the romance along more often than not.  I also enjoy the fact that because Prince Henry is part of the royals of Club Royal, he is a fully trained dom who wants to be a pup and be more submissive... The dynamic is magical.
The world that Elouise East builds in the Club Royal world is amazing and nuanced.  Her descriptions of the surroundings make you feel like you are a fly on the wall, but once again, don't pull you out of the story.  I read Secretive Royal in one sitting, cover to cover because I couldn't put it down.  I don't recommend reading it standalone, because I think you need to have read Rogue Royal to really understand the ongoing sub-plot and also the side characters.   If I haven't convinced you to start the series, you can read excerpts of both books, Rogue Royal & Secretive Royal here on the blog, as well as my Rogue Royal review.
I will say that there are on page instances of homophobia, as well as 'remembrances' of non-con torture related to the homophobia.  There are other acts of violence and revenge that also take place in the book.
5 Stars BDSM Contemporary Heather Puppy Series Trigger Warning