When I saw this one pop up as an ARC opportunity I was so excited! It definitely didn’t disappoint. 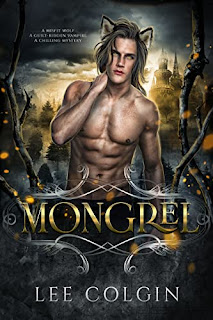 Mongrel, a creature more wolf than man, leads a lonely life on the fringes of pack society—until the night a handsome vampire shows up with a mysterious request.
Bowie, a vampire cursed to a life of endless nights, maintains close ties with his human family. When young girls in their village go missing, he must act quickly. But to find them, he’ll need to convince the local werewolf pack to loan him their best tracker—a wolf known as the Mongrel.
Though he hates the slur, Andras is used to being called Mongrel. When Bowie refuses to refer to him by anything but his given name, Andras can’t help a flicker of unexpected trust toward the stranger. He volunteers to help Bowie, risking banishment.
Can two tenderhearted men overcome their traumatic pasts and work together to rescue the girls before it’s too late? Or will the world’s most prolific killer snuff the flames of their passion along with the lives of the captives?
***
This steamy love story spans the country of Hungary as Andras and Bowie journey through cities and wilderness on their quest to right a villain’s wicked wrongs. Mongrel features a sweetly possessive werewolf, a cinnamon roll of a vampire, and the worst killer in history. A surprisingly fluffy MM Paranormal/Historical Romance considering the subject matter.
HEA guaranteed with loads of laughs along the way and no cliffhanger ending!
Tammy's Review:

I absolutely adored poor Andreas, he was so sweet and insecure and damaged by his pack’s disregard for him. I loved how he volunteered to go with Bowie in spite of his fear and lack of experience with the outside world. He grows beautifully throughout the story and in the building relationship with Bowie.

Bowie is not your traditional vampire character. He’s not very old, only around 45 years total. His continuing relationship with his family is also unusual but a wonderful addition to the story. He is kind and his concern for others is obvious from the beginning.

I could not put this book down once I picked it up. The relationship between Bowie and Andreas is so sweet and well earned. The quest they go through to find the missing girls and save as many as possible is difficult but they find solace in each other.

Overall, I would highly recommend and I am very much looking forward to the next book in the series. I loved Miss Colgin’s last incubus book so I’m sure this one will be just as good.

Heat: 6/10 (takes them a bit to get there but it is sweet and well earned when they do)

World building: 10/10 (well written and easy to picture, I felt like I was in ancient Hungary/Budapest)

Character development: 9/10 (I loved both Bowie and Andreas their journey together was lovely)

Jacquie's Review:
Although it states in the blurb that Mongrel will be a fluffy romance, I hadn't expected it to be quite as cute and fluffy with the background story of hunting for stolen girls.
It took my a little bit to get into, the pacing a bit slow to start with having to establish the story and characters. Once I did though I really enjoyed it.
Andras and Bowie were adorable together, nothing much like a stereotypical werewolf and vampire.
I hope we see these characters again
Rating: 4.5 Stars
Miki J.'s Review:
An adorable tail (sic) of a werewolf and vampire.... told from 1 POV - Mongrel's.....he's an outcast in the wolf pack and a vampire comes to request the services of a tracker. Mongrel volunteers and they then embark on their adventure. This is the start of a beautiful friendship, which obviously becomes more. The story is based in the 1800's with a supernatural twist and is low angst, sweet, endearing, adorable and a lot of fun !! Mongrel learns that he is perfect just as he is and Bowie learns to trust again......can't wait for book # 2 !
Rating: 4 Stars
4 Stars 4.5 stars 5 Stars historical Jacquie Miki J mystery Paranormal shifter steamy Tammy