on November 07, 2021
King's Heart is an awesome fantasy story with action and laughs and talking horses !!  Check out why Miki J. is recommending you add it to your tbr...
From the Blurb: 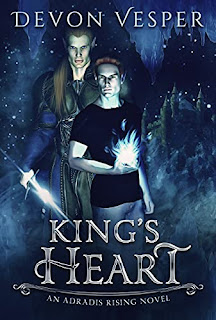 They are the only ones standing between their kind and timeless evil. Will their love survive the fight?
Camden has spent his life not knowing who he is and being told he’s too broken to ever accomplish anything. But the truth is that he isn’t human, and his untrained powers hold the clue to either saving or damning all elven kind. Ripped from the only life he’s ever known and terrified, there’s no time for him to adjust when a gorgeous prince rides to his rescue.
Crown Prince Morough of the Netherdark will do whatever it takes to save the small but fierce omega who is their only hope for saving their world. Falling in love and finding his mate isn’t in the plans, but he won’t turn down his chance at happiness, even on the eve of the apocalypse.
But when it turns out that Camden’s powers offer either salvation or downfall, the stakes are higher than ever. With ominous premonitions of their love getting cut short, their fragile found family may very well be the first casualty of a war beyond winning.
King's Heart is the first book in the stunning new fantasy series, Adradis Rising. Fans of Soulbond: The Omega’s Assassin and the Fated Elves series will recognize this world you’ve been dying to see more of. So grab your copy today and get lost in epic fantasy as only Devon Vesper can deliver!
Tags: Swoony alpha crown prince, feisty omega without a filter, found family, ancient evil, switched at birth, age gap, like serious age gap, 9000+ years of age gap, heat, knotting, virgin omega, name changes, ancient ancestors bent on destruction, Camden making a million+ year old king cry, Morough constantly exasperated by Camden, sane talking horses, murderous talking horses, prissy talking horses, magic kisses, epic adventure, a hint of mpreg, Omegaverse elves, magic, mayhem, and madmen.
This book was previously published under a different title and pen name in another genre. It has undergone extensive edits from its original version.
Miki J's Review:
King's Heart is a great fantasy novel...it's in a parallel world with plenty of twists, laughs & snappy dialogue, action and magic !! The story definitely pulled my heart strings - I was crying and laughing and then some heat !! Loved the characters and I found Kaiden to be innocent & sassy. The only downer for me was that the ending seemed abrupt.....or maybe it was me hoping the book would go on a bit more.....otherwise, it's a great read !!
4 Stars Age Gap Alpha/Omega Miki J MPreg PNR