Jacki James sucked me into the Blue Collar Daddies world once again... despite being 40 chapters long, it felt like time stood still while I read Cooper and Gavin's story!  This is the third book in the series but like the others, can be read as a stand-alone story. 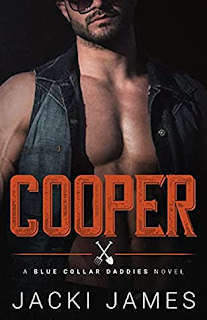 Cooper Shaw knows exactly what kind of a man he wants, and someone who is interested in being a part time boy isn’t it. He wants a boy who will turn over everything to him. But not easily. He wants to have to work for it. What he wants is a boy with spirit and sass. The kind most Daddies want nothing to do with. What Cooper wants is a challenge. Also known as a brat.
Gavin Prince is not a happy boy. He lost his college scholarship because he was partying too much, but come on can you really have too much fun? Apparently his parents think so. They have cut him off and sent him to live with his uncle until he learns his lesson.
Cooper has had about enough of the poor little rich boy that has taken up residence at his favorite customer’s home. Gavin needs to be taught a lesson, and Daddy Cooper is just the man for the job.

Once again, I find myself drawn to Jacki's characters because they feel so real - the "spoiled" rich boy who hasn't been able to choose his life for himself and is banished to live with his uncle for some unnamed transgression... and Cooper, the man who watched him from afar all summer because he didn't want to start something with a man who was leaving...

I do think you can easily read this book as a standalone, but since Ryder & Lucas were also 5 Star reads, why not start at the beginning and enjoy 3 times the daddies!

I have loved all of the books in this series so far and this is no exception. Cooper is a hardworking man who owns his own landscaping business and is a Daddy looking for his for keeps boy. Gavin is a trust-fund boy, controlled by his parents and sent to Texas when he does something they do not approve of.

I loved how Cooper brought Gavin out of his shell and allowed him to discover who he wanted to be. I also really like how each book makes reference to the couples and characters from the previous books so you still get to find out what happens to them. It’s not essential to have read the others in this series but they are just as awesome as this one so I recommend them all!
Overall this is a sweet, no-angst daddy/boy story with a HEA and I really enjoyed it.
5 Stars Age Gap Daddy Heather Opposites Attract Reds Book Reads Series