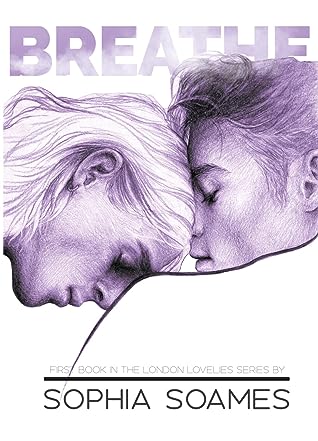 We're kicking off a three day series of reviews for Sophia Soames' London Love series, starting with the book that started it all: Breathe.
From the Blurb:
Meet Ryan, aka, Joey Hole, disgraced former adult entertainer with more issues than he can keep track of. His boyfriend left him for an Instagram twink with 150K followers, his Mum wants him out of her spare room and then there's that idiot at college who just won't take no for an answer.

Meet Luke. He was once the rich kid who'd just been gifted his first car, and now he doesn't even own a bike. He's also slumming it in a house full of ungrateful siblings and his first trip to the Food-bank gave him some goddamn emotional scars. Life is getting better though, and he's acing it at college, as well as making some brilliant new friends. Well except for that stuck up twatwaffle Ryan who won't talk to him and refuses to like his brilliant social media posts....

BREATHE is the first book in Sophia Soames' London Love Series. These stories will follow the ups and downs of four couples living extraordinary ordinary London lives.
Sarah C's Review:
The summary for this book intrigued me, but it did not do the book justice. It didn't even scratch the surface of how amazing this book was. The characters were intriguing. The plot and the relationship between Luke and Ryan had me reading all through work, because I simply could not put it down.
What I like most about this book is the protagonists. Luke is not some ideal physical standard. In fact, in the beginning, he's not even considered handsome. He's overeager to make friends of his classmates, especially with the surly Ryan. Ryan, while conventionally attractive, is not very nice. He's incredibly guarded and has no intention of letting anyone in - for reasons you find out later in the book. They are not drawn together based on intense physical attraction - that is something that comes later as they get to know one another. Instead, they are drawn together by the fact that they're lonely and don't have a lot of other people they're friends with.

Another thing I like about the book is the inclusion of their Instagrams - and the way they provide insight into the characters. With Ryan's Instagram captions, you see a glimpse of the man that he was and the way he struggles to let go of Joey Hole. Then you see him rebuilding himself not as Joey, but as Ryan. With Luke's, you see his world begin to expand. Not simply because of Ryan, but because he gets to know his classmates. His siblings begin to have relationships and they start commenting. His friends' partners begin commenting. Its a visual representation of the way that his world expands.

I'm also a major sucker for good side characters and this book? Oh this book has some GREAT side characters. Luke and Ryan's classmates are amusing and distinct. Luke's siblings come off the page entirely and feel so incredibly real - especially his little sister Olive. Ryan's mom has me rolling many times in the story and cringing many other times. Each side character adds color and depth to the story, making the relationship and the world of Soames' London feel more real.

The pacing of this book was beautiful and the way that even an HEA doesn't fix the way that these men are broken. It doesn't make them into perfect beings or perfect partners or perfect lovers. It doesn't fix their respective traumas. Instead, they learn to be good partners and to respect each other's traumas and to build a life WITH one another and their individual demons. Its not an insta-love by any means, which makes me incredibly happy. Its not a slow burn either, but I'm more than okay with things not being slow burn. Instead, its a very realistic pace.

Trigger Warnings: This book includes an off-screen sexual assault that is discussed. While it is not graphic, it is there. This book also includes mentions of gambling addictions, white collar crime, and parental neglect as major plot points.
Rating: 5 Stars
5 Stars angst Contemporary Hurt/Comfort Sarah C Series