A.D. Ellis has re-released Braeton and Drew, which was originally published in 2016, along with the rest of the Something About Him series.  The story, blurb, and cover have been revised and updated. 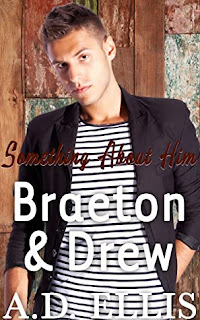 Braeton Reed left his small-minded hometown and disapproving family long ago and never looked back.
Andrew Hines has nothing against a solid, loving relationship; he just isn’t sure he’ll ever find one.
Braeton has been told he’s a bit of a diva. Andrew has heard he’s not flashy enough. Can their differences pull them together? Or will these polar opposites allow society to dictate who they are and who they love?
Braeton & Drew is an opposites attract story that will make you think differently about stairwells.

This was a great witty and well paced book. I really liked both Andrew/ Drew and Braeton as characters, they both have many facets to their characters and are equally well developed and are equal to each other in this book.

The author did a great job in creating a believable world around the main characters with some nice sidelines with old and new characters. I was completely engaged and could not put the book down. I just wanted to pull up a chair and join in. I recommend this book if you like to read about men who fall fast for each other but stay grounded.

When A.D. Ellis announced over the summer that she was taking the entire Something About Him series down from Amazon to re-work the books and covers, I nabbed the entire series of 6 books and binge read 5 of them in a weekend... I didn't review the books at the time, but I did rate them and originally gave Braeton and Drew 4 stars.   With the opportunity to re-read the new version, I was sucked back into their world and loved every minute of the re-read and found that some of the rough edges I remembered had been smoothed out and the story shone through and I fell in love all over again.  I can now easily say this is a 5 Star read for me!