on November 14, 2021
"Sorry, I'm not down with the tortured lovers separated by fate routine."
BLAZE is Book One in a steamy superhero romance series. It has dramatic rescues, evil villains, and an emotionally satisfying Happily Ever After. Fans of comics and superhero movies who want to see their favorite heroes kiss will love this series!
From the Blurb: 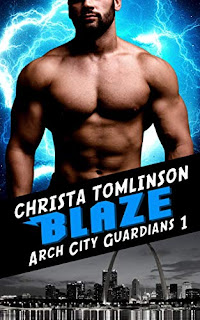 A Dark Hero is Irresistibly Drawn to the Man He Saves from Danger.
In the dark of night, Blaze wages war against St. Louis’s criminal masterminds. Once the sun rises, he’s Jordan Wells, quiet custom body shop owner. Jordan has accepted that it’s his destiny to walk alone in the shadows… until he meets Daniel, a sweet, untrained submissive. Jordan dreams of dominating the young man, of finding respite from his harsh life as a lone vigilante by losing himself in Danny’s loving submission.
Danny Griffin is thrilled to attend an exclusive D/s club, where he meets Jordan, an experienced Dom. Jordan appears to be the perfect man to help him explore his submissive fantasies. But Danny is also attracted to Blaze, the elusive hero who is always there when he needs him. When Danny discovers Blaze’s secret, he hopes that he can have the best of both worlds.
The passion between the hero and his lover is electric but Jordan knows that in order to keep Danny safe, he should let him go. Unfortunately, he can’t seem to tear himself away from his lover’s gentle smiles and soft kisses. Can Jordan risk a relationship with Danny when his life as Blaze is rife with danger?
Miki J's Review:
We have a tortured superhero (Blaze) and nerdy comic illustrator (Danny) who meet when Blaze saves Danny, who was on his way to local BDSM club for the first time. I found this book absolutely entertaining - we have superheros & villains action with romantic relationship happening between the 2 MC's. I found it very sweet with how Danny was taught the ins & outs of a D/S relationship - yes there is Dom kink in this book but it's not too intense. And there is an intensity to the story as well when we discover more on Blaze's background, which affects his life & how he lives his life years later. BLAZE is a very satisfying read indeed !!
5 Stars BDSM Grumpy/Sunshine Miki J Super Hero