on October 21, 2021
Today's Throwback Thursday spotlights Running Lines, the first book in the Hollywood Hopefuls series by Jeris Jean that debuted in January 2021!
From the Blurb: 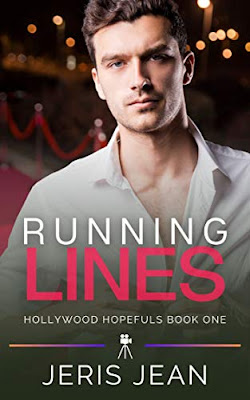 A sexy MM Romance set in Hollywood, full of sweetness and heat. Book One in the series.
Finn may look like a Romeo + Juliet-era Leo, but he’s out to prove he’s got what it takes to break the teen heartthrob mold. Grayson is a serious actor, with “serious” as the operative word, so he’s not thrilled to find himself hopelessly attracted to his young new co-star.
Starring on a teen soap may have made Finn Everett Hollywood’s latest “it” boy, complete with the 10 million Instagram followers to show for it, but does he have the chops to cut it as the newest cast member on television’s biggest drama, Frost Manor? Finn’s determined to prove himself as more than just as sex symbol and win the respect of his co-star, Grayson Winter.
Grayson is gorgeous, talented, and the celeb Finn has been secretly crushing on for years. Grayson is dedicated to his job. He has big aspirations to be Hollywood’s best leading man, and he’s willing to make personal sacrifices to get there. When his new scene partner is the charismatic and intensely distracting Finn Everett, Grayson is shaken loose from his single-minded ambition.
Excerpt:

What would it feel like to dance with Grayson? To be led effortlessly across the floor in smooth glides, Grayson’s strong hand at his waist, his hazel eyes locking with Finn’s, as they moved together through the crowd? It would be a dream, Finn thought.
“You know what I thought about while filming the dance sequences?” Grayson asked, his voice quiet despite them being alone in the room apart from the musicians.
“What?” Finn’s voice was a soft whisper in reply.
“I thought about how much better it would be if you were the one dancing with me. I wanted you to be the one in my arms, and I wanted to be looking into those unbelievable blue eyes,” he said as he led Finn in a flawless waltz. “It was probably the most difficult scene I’d ever had to film because I had to watch you from across the room as we each danced with other people, and I had to pretend that I was happy where I was and not like I was dying to be where you were.”