Three's A Crown by Isla Olsen

Three's a Crown features Prince Aleksander, Boyd and Lennox and is an interesting romp that begins to explore a three-way relationship.  I picked it up because I'm usually a fan of Isla Olsen's work. 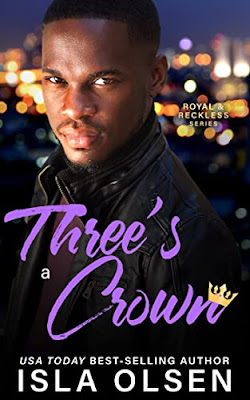 Lennox
As a member of an elite private security firm, I’ve hunted killers, taken down crime rings, protected high profile figures, even helped thwart a couple terrorist attacks. But now one little mistake has seen me exiled to Siberia. Or close enough...
I’ve been assigned as a new security guard at the Royal Palace of Korova, and instead of being in the midst of all the action, where I’m most useful, I now spend my days trailing after the young prince and princess during their various lessons: horse riding, ballet, painting...the banality goes on...
There’s one silver lining: Lachlan Boyd, the palace head guard and my new boss. Smart, sexy as hell, and a Scottish accent? Yeah, I’ll take that combination, thanks.
But when the king’s younger brother, Prince Aleksandr, returns to the palace, it doesn’t take any of my investigative training to figure out there’s a history between him and Boyd. And that Aleksandr’s back with one mission: to rekindle their old romance.
I’m not entirely sure what Boyd ever saw in the guy. Aleksandr is a spoiled, immature smartass who insists on getting under my skin at every turn. He’s not even that attractive. Or, maybe he is, but only if bratty twinks are your thing. And they’re not mine. At all…
If he’s my competition for Boyd’s affections, I’ve got this in the bag.
Heather's Review:
This was a cute, low angst book that didn't come together as a true polyamory story for me.  It really felt like a committed three-way sex arrangement more than a true relationship.  The characters themselves were kind of stock - and all of their relationship talk seemed to center on sex - who was a top, a bottom and vers while throwing I love you's around from Boyd and Alexsander's previous relationship.  Lennox introduces a BDSM element to the relationship and then once they're together it disappears...
This book felt rushed and lacked emotional connection and depth.  I kept waiting for them to actually talk as a triad or even date together, but it never happened... It can be classed as a romance because the book ends in the promise of a HEA, even if it's not well explained.
If you're looking for a cute romp with some hot M/M sex scenes and a bit of three-way action, Three's a Crown is a good book for you.  If you're looking for a romance with depth and communication, you may want to pass this one by.
Heather's Rating: 3.5 Stars
Sarah's Review:
I always set into a new Isla Olsen novel with incredibly high expectations. Given how much I loved The King and Jai, its easy to say that my expectations for Three's a Crown were pretty high. While the book was good, it didn't quite meet the level I've come to expect from Isla's other works.

This book is the story of the prince of Korova, Aliksandr, his ex-boyfriend/head guard, Boyd, and the new guard, Lennox. Each of these men are pretty well developed and have amazing chemistry with one another. The dynamics between each individual pairing are remarkable. But there's something missing in the triad, and it could very well be the lack of time spent with them as a trio. Almost every encounter in the book was either Alik and Lennox, Alik and Boyd, or Lennox and Boyd. For a book with an MMM central romance, there wasn't a lot of time spent between all three of them to really see how that dynamic plays out in the long run. I also had a really hard time with Boyd's character and the very stereotypical Scottish accent, but as I'm not Scottish nor have I ever had a lot of interaction with anyone Scottish - as in from Scotsland - I can't quite say if it was a poor narrative choice or a personal hurdle that I had to overcome.

That said, I still greatly enjoyed the book. I think it would've easily gotten a five star review if we got to see the trio together more. While I did love getting to see a lot of the individual dynamics - something that is often missing from MMM books, the trio aspect didn't feel as believable because of the lack of time. As mentioned, the characters themselves were wonderful. The communication between the three of them was (mostly) very good. There were a few points where it could've been improved and still felt realistic, but in general, very good.

Three's a Crown was another pleasant read from Isla Olsen, though not my favorite of her works and not quite as good as The King and Jai. This book can be read as a standalone and I devoured it very quickly, even with the few points against it.
Sarah's Rating: 4 Stars
3.5 stars 4 Stars Heather Sarah C Series steamy Triad