The Secrets We Whisper to the Bees by Sam E. Kraemer

on October 31, 2021
You will love the bees and old lady who tends to them.  Full of twists & secrets, this book is perfect for a Halloween read of The Secrets We Whisper to the Bees, which was originally released in October of 2019...

"Hell, it was the first time he knew what it felt like not to feel guilty about coming, but when he saw the glowing smile on Eli's face, he knew every encounter before that night had been wrong." 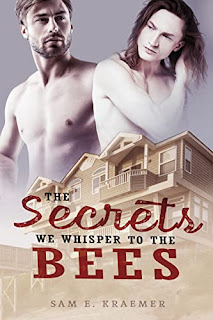 Jex Ivers is running for his life!
After he escapes from a madman, Jex finds himself working for a kind, old woman in a beach town in Delaware. He can tell the widow has suffered a broken heart, much like himself. Soon, Jex starts to believe his life might just turn around if he can manage to stay under the radar until the trial.
When he crosses path with a handsome man named Elijah Moore, Jex hopes it's a sign that his dark cloud is about to make way for sunny skies.
Elijah Moore is looking for more out of his life!
As the chief of police of Haven's Point, Eli has a job he loves, good friends, and a cottage on the beach. Happiness, however, is nowhere to be found.
One day, a stranger shows up in town and catches Eli's eye. Something about the redhead triggers his protective nature, and as Eli learns more about Jex's situation, the chief is determined to do whatever it takes to keep young man from harm.
Unbeknownst to either of them, a dangerous secret has been whispered to the bees, and as everyone knows, the bees never give up their secrets…
"The Secrets We Whisper to the Bees" is a standalone work of fiction. It's a M/M Thriller and Suspense story that contains on-page sex and violence, and although there is a romantic subplot with an H-E-A, this story is not a romance. There are also references to human trafficking, child abuse, sexual, physical, and emotional abuse. Please be advised.
Miki J.'s Review
Wow….this book is special.  I really really liked it.  It has a bit of everything but it’s not overloaded/clunky…….there is mystery & suspense, hurt/comfort, small town with Sheriff and a feisty older lady.  Book is written from 3 POV’s – the older lady, young man learning to live again and the Sheriff.  And yes, there romance aplenty and for sure, steamy scenes.  The Secrets We Whisper to the Bees is a great all-rounder!!
Please note – there are trigger scenes (told in flashback)
Rating: 5 Stars
Laora's Review:

It was so good to read a murder mystery woven into a story about finding and trusting love. Sam E. Kraemer created an unusual but great story.

Jex had to learn how to cope with what life dealt out to him and finding his self again after being to very traumatic years when he had no control over his life. He finds himself in Haven's Point after fleeing the city.

Eli is the local police chief who is smitten on sight, but has the patience to be careful and gentle with Jex . He is actually in the neighbouring house from Jex.

The story was well told, rolling out explanations and information in stages.  Jex and Eli find their HEA after some turns in the story.

And a special mention to the author for creating the great Mrs Wickenham, she was such a  great character.

I recommend The Secrets We Whisper to the Bees to readers who like a good mystery and angst intertwined with theory mm romance story.