The incubus's Mate: A Gay paranormal story with Wings by Delaney Rain

on October 30, 2021
When he finds The Menagerie, Edgar is thrilled to see all kinds of costumed people drinking and dancing... he has no idea that he could become The Incubus's Mate.
From the Blurb: 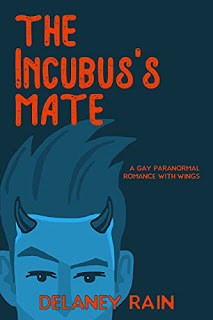 Edgar Van Helsing is a monster hunter. Well, okay, technically he's a twenty-something tree farmer with a monster fetish. His family thinks he's in Cleveland in January on vacation, but he's really here to see if he can find the location of a nightclub he's seen in online videos. Videos showing monsters having wild sex with humans. Edgar wants to be one of those lucky few.
When he finds The Menagerie, Edgar is thrilled to see all kinds of costumed people drinking and dancing. Werewolves, vampires, demons, and…a dragon? The last one is way too aggressive when propositioning Edgar, but he's saved by a small yet fierce guy with wings. Escorted into a private room, Edgar then finds himself getting the sexual fantasy he's been longing for with the demonic-looking Sai Patel.
Edgar goes home with Sai during a snowstorm for even more fun, only to discover the city's been locked down by a snow emergency in the morning. Not that being trapped with Sai is a hardship, even if his cupboards are bare and they have to trade doing manual labor for food from Sai's neighbors. They're getting to know each other, growing closer, and Edgar starts to hope the snow never stops falling.
But when Edgar suddenly discovers that Sai wasn't wearing a costume and learns that no one else at the club was either, he has to come to terms with the fact that monsters are real. The sweetest man he's ever known is a supernatural being, but does that really matter? Now Edgar has to decide if he wants to go back to his simple life on the family farm or let himself fall in love with an incubus.
Laora's Review:
For some reason The Incubus's Mate got stuck on my tbr, but boy was it good to finally get to it.  This was such a fun, light and funny read. I had not read many books by Delaney, but after this one I will be sure to read more by her.
I love the idea of 'The Menagerie'. Edgar (human) and Sai (incubus)  have an instant connection and turn out to be mates. After their night together they are forced to stay together due to a snowstorm. Their antics and adventures in and outside of the building are fun to read. Of course they fins their hea/hfn.
If you like a fun, happy light and imaginative read with fun characters and side characters The Incubus's Mate is your book."
4 Stars Fated Mates Forced Proximity Laora PNR