on October 13, 2021
Sugar and spice and all things nice. A short and sweet story of fated mates.  Once again we have a few different perspectives on this book - Check out Red's Book Reads reaction and a guest review by Jacquie of Tasty Temptation by Skyler Snow!
From the blurb: 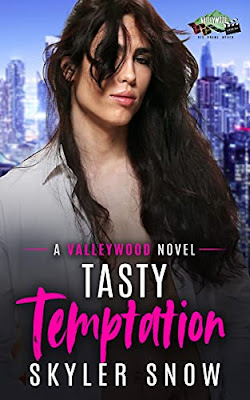 An alpha looking for peace. An omega who wants so much more…
Eli: I’ve been the talk of the town since I was a kid. Fame, fortune, the spotlight, that’s the norm for me. But no one tells you celebrity comes with major pitfalls. Like not getting close to anyone. Or attracting the attention of a certain psycho who won’t leave you alone. I just want to act, go home, and be by myself. But my parents are determined to be a thorn in my side. And that thorn is named Brice Wilson. He might be a chef, but he has a backbone made of steel. I shouldn’t be attracted to this alpha, but every time he comes around I’m stuck. Too bad the man gets on my last damn nerve.
Brice: This is the chance I need to get ahead. An ex-convict and world-class screwup, my options are limited. Thank Goddess for my cousin doctoring up my papers and making me out to be a perfect little chef. There’s just one thing he failed to mention: the pampered princess known as Eli Vega. I don’t do well with brats and this omega takes the freakin’ cake. My wolf thinks this is our mate, but I want nothing to do with the man. Too bad fate has other plans.
Red's Book Reads Review and rating:
This is a really sweet book about Brice who has recently been released from prison and Eli, an actor on a popular tv show. Brice is an alpha trying to put his past behind him and Eli is an omega - and a bit of a diva - with a dislike for alphas. The story between these two moves fairly quickly but it feels natural and doesn’t feel rushed like some similar stories can be. I loved the contrast between the two of them and I also liked the way they were able to open up and trust each other as the relationship progressed. If you are looking for a short and sweet story with a HEA then I definitely recommend you give Tasty Temptation a go.
Rating 4/5 Stars
Jacquie's Review:
Brice and Eli have real chemistry and that ignites at first with a series of biting interactions, with Brice surprising Eli by giving as good as he gets. Brice calls Eli Princess and the name is more than fitting until you get to know Eli a little more. The omega has some real issues around things that have happened in his past but I won’t spoil those!
I would have loved to get to know more about Brice, the reason for his conviction is touched upon but I guess I really just wanted a bit more on that. I really liked his character in that although he’d been in prison, he wasn’t hardened and manages to control his impulses really well.
The sex scenes between the pair are hot but not overly long. Although it is an Alpha/Omega pairing, that aspect of the dynamic isn’t overdone and isn’t all that important except that Eli is wary of alphas.
All in all, Tasty Temptation is a super sweet novella with a more than satisfactory ending.
Rating 4/5 Stars
Jacquie's Bio:
Jacquie spends her life buried in either books or cats, sometimes both. She can often be found wandering the Scottish Coastline. Mum of two, currently studying for an English degree. She keeps busy with a revolving schedule of writing, alpha and beta reading, reviewing, and supporting various communities
4 Stars ABO Fated Mates guest review Reds Book Reads