Okay, I was blown away by Pretty Obsessed... and not just by a meet-cute involving River getting a blow job during his first meeting with Emory.... 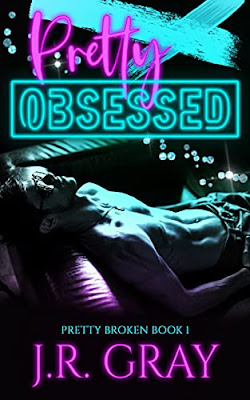 Emory Ker
Who makes out with a random guy at a club while someone else is giving him head? Not me—that's who. I'd never even hooked up with a stranger. Welp, now I had. If you could call what I'd done hooking up. But it was so much more intimate than a hook-up. I'd tasted his lips as someone else made him come. He'd gasped into my mouth.
Now I was sitting in front of him and he was asking me to kiss him again.
River Wade
We became famous overnight.
One day I was a twenty-four-year-old drummer slinging pizzas to make ends meet and the next, I was a member of the most popular alternative band ever.
Despite being world-famous, there was no connection in it. I'd lost touch with reality. With intimacy. I couldn't find a place to be normal. I'd lived my entire life straight-edged while watching obsession destroy my best friend.
Obsession terrified me.
That is until I met him.
The first taste left me intoxicated.
The rockstar obsessed with the writer—rather funny if you think about it.
After a night with him, he vanishes into thin air, and all the money in the world can't help me find him.
I have to track him down and convince him there might be millions of people who would do anything to get a chance to sleep with me, but I only had eyes for him.
Convince this beautiful boy I'm pretty obsessed.
Pretty Obsessed is an out-for-you romance, with a dirty-talking, obsessive rockstar who falls for a cinnamon roll writer. This is book one in The Pretty Broken series. All books follow a different couple.

Heather's Review:
From their unusual meeting to their intense relationship, Pretty Obsessed gives you all the feels, all the heat and all the sweet that you could want in a Rockstar/Writer romance!  River really is pretty obsessed and it's clear to everyone around him except Emory...Emory's attention to detail and words can both make or break the situation and his past hurt doesn't help his judgement.
JR Grey is able to infuse all of the characters with incredible souls, teasing out backstory and preparing us for future stories involving the band, Pretty Broken.  I loved the pacing, detail and flow of this book and cannot wait for Iris' story to continue!
If you like a book that explores the reality of being a famous rockstar and busy writer as they try to find love and forever, than pick up JR Grey's Pretty Obsessed and become obsessed with River and Emory, Iris and Caspian like I am!  Fair warning, you will not want to stop at book 1.
Triggers mentioned - side character has heavy substance use (drug and alcohol) and implied risky behaviour.
Cassie's Review:
Pretty Obsessed is a great book. It has your Rock Star, River, who has band issues and finally admits to himself he's bisexual after meeting a writer, Emory. After some ups and downs, they do get their HEA. Great characters, storyline. Looking forward to the next book.
5 Stars Cassie Contemporary Heather Rockstar steamy sweet Trigger Warning