He turned at the noise and was about to say hello when his breath was stolen from his lungs. It couldn’t be, could it? He was definitely older, though. Yeah, fucking eight years older and still as sexy as fuck. “Jacob?” he asked, not quite believing what he was seeing. “That’s me.” Jacob’s eyes met his, and his mouth fell open. “Dominic?” 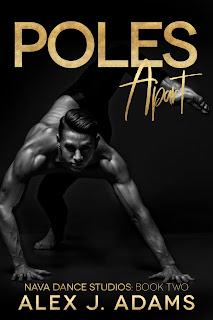 Passion, that’s what Dom had, passion for pole dancing, and nothing would stop him following his dream
But a call in the middle of the night, had him running home, leaving the life he loved. His brother needed him and to Dom, family was always important.
So here he was, back where it all began and where it had all ended.
A chance meeting, a reconnection with the one he thought he’d lost forever.
He’d been sent to tempt him that was for sure and he didn’t think this was ever going to be enough for Jacob, he needed and wanted it all from him again. Tears pricked his eyes as he remembered how he’d almost lost him, had almost had to live his life without him.
Yes, he wanted everything, his mind, his soul and most importantly his heart. He just hoped he was willing to give it
Poles Apart is the second in the Nava Dance Studios series and whilst it can be read as a standalone, it would be advantageous to read book one, Dance With Me, first.
This is a story of second chances, lost loves and reconnection. A story that will warm your heart and is guaranteed to leave you smiling. Trigger warnings: homophobia and attempted sexual assault
Laora's Review:
This book is a solid 4,5* for me. This is the second book in the series and also the second published book by the author. She did not disappoint. This is  a second chance story for Dom, which we met in ' Dance with me', is a (pole) dancer and instructor and Jacob , a teacher. The story is told  from both their POV, which  is great in the way that you see the same scene from both characters , however it also gives me as a reader a bit of distance. I could follow the story development  very well; there where references to characters/situations  from book one and this gave me another insight into that story as well. The character development was well done and believable, no sudden shake ups in character but slow and steady with an all to human tendency to fall back in old habits.
The MC's each get one major hurdle on their path and have to deal with that as an individual and as a couple while finding their way as such. There will be a third book in the series and I hope it will be about Hayden, even though he is not a dancer, but their neighbour.
This book has a hfn/hea. Be aware of potential triggers, please read the blurb provided by the author.
4.5 stars ARC Laora second chance Series Trigger Warning