on October 27, 2021
Wow. So every time I read one a book by Onley James it becomes my favourite and I think it can't get any better - and then the next book comes out! 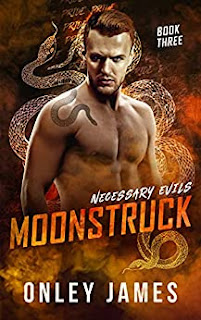 Atticus Mulvaney is the eldest son of eccentric billionaire, Thomas Mulvaney—a role he takes very seriously. Atticus takes everything seriously. Like his brothers, Atticus is a psychopath, raised to right the wrongs of a broken justice system. Unlike his brothers, he’s not very good at it.
Jericho Navarro is no psychopath, but he is a vicious killer. Like Atticus, he also has a secret life. To most, he’s just a mechanic. But to a ragtag group of social misfits, he’s Peter Pan, teaching them to eliminate those who prey on the weak with extreme prejudice.
When Atticus and Jericho come face to face over a shared enemy, their accidental meeting ends in an explosively hot hookup neither can forget. But they have nothing in common. Atticus is a buttoned-up closeted scientist and Jericho is a man on a mission, determined to find and punish those responsible for the death of his sister. Still, Jericho can’t stay away. And, truthfully, Atticus doesn’t want him to.
As Jericho’s mission begins to bleed into Atticus’s life, two separate but equally brutal families will need to learn how to fight together to take out a common enemy. But no amount of brute force can show Jericho how to scale the walls of a psychopath’s heart. Can Jericho convince Atticus that, sometimes, the couple who kills together stays together?
Moonstruck is a high heat, intense psychopath romance with an HEA and no cliffhangers. It features a fumbling, sexually confused maniac and the dominating, unapologetic gang leader who can’t stop tormenting him. As always, there’s gratuitous violence, very dark humor, more killers than you can count, and enough explosive chemistry to level a city block. This is book three in the Necessary Evils series. Each book follows a different couple.
Red's Book Reads Review

Never before have I fallen in love with psychopaths!

I adored Atticus and loved how unashamed Jericho was about his lifestyle and how he does what needs to be done. The chemistry between these two was off the page and I just couldn't get enough of it! I loved how their relationship wasn't what was expected but it really worked for them.

I couldn't put Moonstruck down and I really hope we get to find out more about Felix and the rest of Jericho's family as well as the rest of the Mulvaney brothers.

P.S. If you missed it, I reviewed Psycho here and Onley James answered our 10 Things Author Interview and shared a little about how these characters found their way into her psyche here