on October 20, 2021
Today we celebrate the debut of a new M/M Romance author!  Last Minute Boyfriend by Erin Becker!  Her first novel ships a snarky business man with a sweet, nerdy restaurant worker during a weeklong visit to Montana...
From the Blurb: 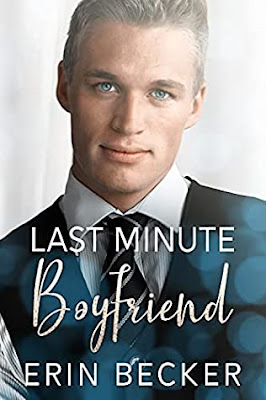 Who knew delivering food to a rude, narcissistic jerk would lead to me posing as his boyfriend for a week?
Growing up in the big city, I haven’t experienced much outside the concrete jungle. So, when Liam McKenzie asks me to be his fake boyfriend at his brother’s wedding, I jump at the chance to leave the big city behind for a fancy ranch in Montana. It doesn’t hurt that Liam is the sexiest man I’ve ever seen.
Falling for him wasn’t part of the plan. So, when he starts letting his guard down and showing me who he really is beneath that icy exterior, things get complicated. I have a horrible track record in the dating world. I always get attached and then they never stick around. But this time feels different.
Can I pull off being a last-minute boyfriend or will this end in disaster?
Last Minute Boyfriend is a low angst MM romance featuring fake boyfriends, an evil rooster, kisses under the stars, and a guaranteed HEA.
Red's Book Reads:
A good debut novel and enjoyable read. I enjoyed this book but there were a couple of parts I did struggle with.   At the beginning especially, Liam isn’t a particularly likeable character and whilst his past hurts are discussed I am not sure it fully absolves him from his actions. Jake on the other hand is super sweet and I just want to give him a hug. I loved Liam’s family as well.
Rating: 4 Stars
Marie's Review:
This story was unbelievably good. What started out as a fake boyfriend story turn into a real Romance by the end. It was not fast moving it was just at the right pace for a relationship to build. I love how the main character was so unsecured in the new relationship that was building had a misunderstanding almost ruined it for him.
One point in the story one of the character brings up the name of the book talking about his relationships. I just love when that happen. The author is it really good a building the characters and the plot that you know exactly what is going on and you can almost feel the emotions that the characters are going through this is a must read book.
Rating 5 Stars
Heather's Review:
Last Minute Boyfriend was a cute and fast read for me.  It is low angst with interesting characters and some fun laughs on a ranch in Montana.  There were a few places where I wished the author had created more depth in feelings and I would have loved to see the ending expanded to include more post-climax relationship, but it was a sweet read and I recommend checking out Erin Becker and Last Minute Boyfriend when you're looking for a gentle story arc with a single climax arc and a slow burn to sweet love...
Rating 4 Stars
4 Stars 5 Stars Fake Boyfriends Heather Marie New Author Reds Book Reads slow burn sweet