on October 28, 2021
Jacquie begins: "I'm a big fan of Helen Juliet's fairytale retellings. Golden was no exception and before this one, Hair Out of Place was probably my favourite."
From the Blurb: 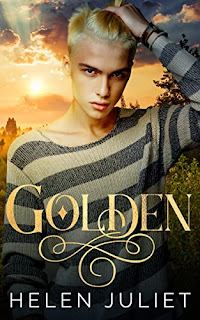 Can three very hungry bears find their own sweet golden boy?
GOLDIE
Thanks to my no-good ex, I’m up to my eyeballs in debt…to an adult entertainment company. The owner offers me the chance of a lifetime: if I keep my lips zipped about why I’m there, I can work off the loan in front of the camera. I’m thrilled, but self-conscious: who wants to work with a skinny twink like me? Then the biggest, scariest star of all asks for me. In fact, Daddy demands me. And, like both his partners warn me: what Daddy wants, Daddy gets. Can I really handle three bears? As they close in on me, I realise…it’s too late to run.
DADDY
Goldie is shy, innocent, brand-new…and totally irresistible. I’m going to make him ours. The three of us have enough love for a fourth. It’s supposed to be only for a weekend, but our golden angel’s secrets betray a broken soul that needs mending…and I’m the man to do it. Goldie’s sleazy ex is too cold for him, and this weekend might be too hot. But the four of us together? That feels just right. And when I find out why Goldie’s really there, we’ll stop at nothing to save our golden boy.
Golden is a super steamy, standalone MMMM gay romance novella featuring a picturesque cottage in the English countryside, lashings of praise for a shy boy, one very fat cat who knows best, enough porridge for four hungry tummies, and a guaranteed HEA with absolutely no cliffhanger.
Jacquie's Review:
Incredibly steamy almost from the onset, as you would except from adult industry entertainers, the softer feelings grow after. Some would consider the feelings a little quick to turn into love but they spend all weekend together and their connection is immediate.
I adored the way that the bears were characterised, each were distinct from each other, and how no one was ever left out. All too often in poly groups, one side of the relationship overpowers the other, but not so here. Goldie seems to balance them and they are so loving as a group. There’s not one of them that I like least.
A teeny bit of angst towards the end with some ex drama that absolutely needed addressed and a spectacularly sweet happy ending.
I’d give Golden a very high 4.5, losing that 0.5 on account of how quick the L word appears but I would absolutely recommend this and re-read it.
Heather's Review:
I don't usually go for fairytale retellings - I think I was turned off them when I read M/F but Helen Juliet has completely changed my mind with Golden...
Even in the short space of this novella, she is able to weave a complete story arc that flows and makes sense... The characters are reasonably well defined, particularly Daddy and Goldie, but you know who all four men are.  The sex is off the charts hot, but makes complete sense within the story, so it's not overdone.  I know Jacquie was surprised at how fast the L word was brought up, but for me it just added to the sweetness of the story and was the cherry on top of the porridge :)  There were just enough Three Bears references to make it fun without being overdone or overwhelming.
I give Golden 5 Stars. I agree that this is a must read if you like a good polyamory story and some hot MMMM action!
Tammy’s Review:

I loved these four characters!  I rarely read MMMM, I think it’s mostly because there aren’t many out there.  But I loved this one!

Goldie is such a sweet broken boy, he needs someone strong and understanding to love and take care of him.  He’s so insecure and under estimates his own value.  But Daddy and his boys will show him the way.

This is a scorching read, so be prepared!

Heat 8/10 (high heat, although there’s enough story that I wouldn’t call it smut)

Character development: 8/10 (we get to know Daddy and Goldie best, but you get a good sense of Papa and Baby too)