on October 02, 2021
Vinni George's Door Number Two is short, sweet, and just in time to fill that Halloween Party ache that comes with Spooky Season. "If you're looking for a book that's short and sweet, then Door Number Two is a great one. It's technically book one and a half of the Open Doors series, but I've not read the series and was able to fully understand it, meaning that it works very well as a standalone. 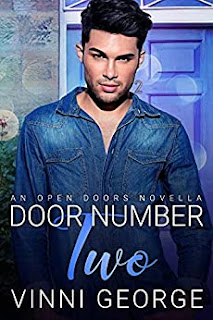 From the Author:
Corbin Fisher needs a life. He just isn’t sure a blind date at a Halloween party is the best way to get it, but he digs out a costume and goes anyway.
When Corbin meets his date and sparks fly, he’s happy he took a chance, until he finds out the guy he hooked up with wasn’t the date he was supposed to meet.
Will Corbin be able to track down his mystery man and find out if love waits for him behind door number two?
Door Number Two is a 16,000-word short story featuring mistaken identity, misplaced costume props, a merman tattoo, and a meddling sister. While it is book #1.5 in the Open Doors series, it can be read as a standalone.
Sarah C.'s Review:
Door Number Two features Ryan, a former marine, and Corbin, a boy who hasn't quite found his footing since moving to San Diego from Boston. They meet by accident. Corbin goes to a Halloween party and he's supposed to meet up with a blind date, Brian, who tells him he'll be dressed as Captain America. Ryan is at the same party, dressed as - you guessed it. Captain America. They hit it off and Corbin promises to call or text.
Except this is a case of mistaken identity.
Despite this being a novella, George takes the time to show us who the characters are. I felt like I got to know them in the short period that I spent with them. They were decently developed for a book that took place in approximately 24 hours (epilogue notwithstanding). We got a nice glimpse of the side characters, enough to feel like they existed as more than dialogue on a page. I loved the brief bits of familial relationship we got with Ryan and Millie.
Honestly, the only thing I didn't like about this book was that it wasn't a full length novel. I could've read so much more on these two men.
Rating: 5 Stars
Heather's Review:
After slogging through a book that I had to DNF because I couldn't pay attention anymore, I was so happy to read Door Number Two by Vinni George!  This novella had everything you want in a great story - characters with enough backstory to know who they are and where they are coming from, a meet-cute to die for, insta-attraction, a short but not insurmountable crisis and a HEA!
Honestly, this was a perfectly balanced short read that was exactly what I needed and if you need a cute, low angst HEA with a ton of good feels and a Halloween Party, than pick up Door Number Two today!  You won't regret it....
Rating: 5 Stars
5 Stars Halloween Heather novella Romance Sarah C Series