Blood of the Land by Adrik Kemp

on October 30, 2021
Confusing but compelling, Blood of the Land by Adrik Kemp was an interesting take on traditional vampire myths but not without some issues. 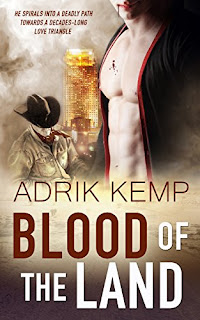 From the Blurb:
When an ancient Italian vampire travels to the pioneering Australian outback, what he finds there triggers a decades-long love triangle from which there is no escape.
Mack, a young Australian cattle farmer, makes his living on his father’s cattle station. The work is hard and the days are long but he is content with the life he has been born into. Unfortunately for his family, he is awakened to forbidden desires of the flesh by intriguing visitors from far-off Italy. When these visitors reveal themselves as lustful creatures of the night, Mack bites off more than he can chew and finds himself in a predicament he is ill-equipped to handle. Lost and seemingly alone, he spirals into a deadly path toward a decades-long love triangle between himself, the monster who made him and the love of his undead life.
Jacquie's Review and Rating
Often it was difficult for me to follow with POV changes mid chapter with no marker to show the change. There were a few continuity errors, things not adding up which I found to be confusing.
I wouldn't describe it as a love triangle either, though one part of the main couple is intimate on page with another man. I can't break it down without spoilers though.
The steam level was high and I enjoyed the way the vampires were presented, their abilities and how they are made.
Since Blood of the Land is part of a duology the ending is more abrupt with questions not fully answered.
Rating: 3.5 Stars
3.5 stars historical Paranormal Series vampire