Once again Beth Bolden brings us a sweet, slow burn romance featuring one of the characters from her Food Truck Warriors series that I wondered about ever getting a book.  I knew that Ross might be a little misunderstood by his fellow Food Truck Owners but I had no idea what exactly was in store for him in Wheels Down. 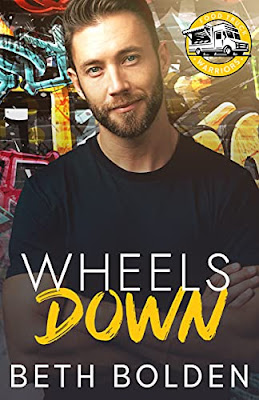 Shaw isn’t his friend—until Ross discovers he’s so much more.
Ross Stanton is having a bad week—a bad month—really, a bad year. But the last thing he wants, after the betrayal of his friend and business partner, is for anyone else to know just how much he’s fighting for survival.
He’s struggling to keep his food truck and to maintain appearances, but what Ross doesn’t realize is that Shaw Finley, the bartender from the Funky Cup, has seen right through his charade.
Shaw offers the couch in his apartment over the bar, suggesting that saving money on rent might help salvage Ross’ failing prospects.
Even though he doesn’t really consider them friends, Ross discovers that Shaw is great to talk to, easy to look at, and he likes him. Late nights and lazy mornings and evenings with only the polished wood of the bar between them lead to an attraction that Ross can’t deny—and that Shaw doesn’t even try to.
But falling in love isn’t as easy as falling into bed together, and Ross isn’t even sure what he feels is love, until he figures out that it couldn’t possibly be anything else.
Heather's Review and Rating 5 Stars
This was one of my favourite Food Truck Warriors books - it's friends to lovers in the best way.  I love how clueless and awkward Ross is as he navigates his new broken reality.  I also love how Shaw builds him up as a friend before acting on his attraction.
One of my favourite things is how methodical Ross is about his building attraction to Shaw - he doesn't take anything for granted and stops to analyze his behaviour and his feelings.
Wheels Down is a true slow burn, friends to lovers with a long arc, but it is incredibly sweet and makes for a feel good read!
5 Stars ARC Contemporary Friends to Lovers Heather KU Romance Series slow burn