on September 16, 2021
Today's Throwback Thursday takes us back almost 4 years, however the second edition with new content was recently published!
Journey of Dreams 2nd Edition
From the Blurb: 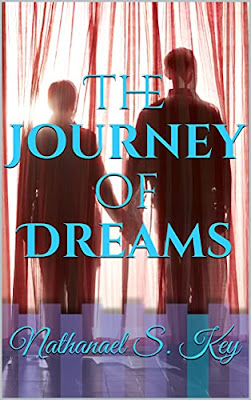 A life journey you’ll never forget…
“The Journey of Dreams” (JOD) is a heartbreaking and unforgettable [POV] story of a young Southern gay teen, Christopher, from early adolescence into adulthood. It is an incredibly inspiring story of hardship, loss and heartache, to love, joy and happiness. It’s about perseverance through some of the most unimaginable circumstances that will test the limits of one’s fortitude; it’s a story of survival against inconceivable odds.
Christopher’s chronicle encapsulates that faultless age of fresh discovery, the brutal truths of life, and a myriad of tribulations in which Christopher had to endure before finally finding the greatest gift in the universe—the love of his life. But will it be too late?
JOD will leave a forever imprint of LOVE in your heart, take you to places physically, emotionally, and mentally that maybe you’ve only dared to explore. Christopher’s story will have you laughing one minute and crying like a baby the next. It’ll rip your heart out and tax your emotions to their limits.
This is an engaging, heartfelt, vulnerable, and authentic narrative, dealing with abandonment trauma, repressed memories of physical and sexual abuse, heartbreak, joy, sadness, sexuality—enough to soak your pants—being disowned by family, struggle with faith, military service, loss beyond measure, coming of age, self-discovery, genuine love, healing, and the endless pursuit of dreams to find the end of the rainbow.
This is the story of a tortured soul, on his journey to find happiness, love, and acceptance, told during a time when this kind of clandestine love balanced on the cusp of sin and the brink of acceptance. JOD explores a bold abdication of the norm, the genuineness behind the often-concealed untold love and passion between one man and another.
(The ending won’t disappoint—it’ll soothe your soul.)
JOD will take you back to your teen years and then gradually bring you forward. Along the way, you’ll fall in love with the characters and laugh out loud. If you’re looking for a story that’ll make you “ugly” cry, then look no further.
Excerpt:
"Just as I neared the door to leave, I turned back in a visceral reflex to see if he was looking back. I turned back that final time to see the greatest love of my life, who was now given eternal sanctuary and perpetuated in an impervious slumber, no longer affected by the mêlées and miseries of life.
This was the fatal blow.
This was the moment when my heart died."
About the Author:
"Nathanael (Nathan to friends) grew up in the Deep South, and realized around 3 or 4 that he was different than his peers.  He was attracted to one particular boy from his day school!
This attraction toward his own became a most highly guarded secret, which is often necessary for certain areas of the country, especially during that period.
Nathan came from a military family. His late dad served in the Army and his late mom was in the Air Force.  It was no surprise that his late older brother also joined the Air Force, and it was only natural that Nathan followed in their footsteps by serving in the Air Force as well.  He worked in national defense, mostly in support of NATO, living & working in a remote location in northern Germany—one of the best and most rewarding experiences of his life!  After suffering from injuries, he separated from the military but continued his service to our nation as a civilian.
Now, years after separating completely from government service, Nathan still feels a strong desire and connection with service to our nation and to others. He volunteers his time as a freelance consultant to provide critical support to fellow Veterans (and others) who need help with navigating the VA system (filing claims, avoiding the almost certain bureaucratic pitfalls, etc.), or help with other matters they otherwise cannot resolve on their own.
Somewhere, during all this, Nathan found the time to write and tell his story, Journey of Dreams!  It is an honor to be able to share it with you!
"
#ThrowbackThursday