Caged in Darkness by Amy Thorn 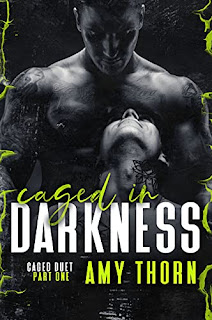 Caged in Darkness was definitely a little bit darker than what I would normally read. The violence was well integrated into the storyline though. The reasoning and background for the gang war between the motorcycle club and human trafficking ring was very effective.

Getting kicked out of the army was the worst day of my life. I never thought I'd find direction again, until my brother suggested I prospect for the Black Death Riders Motorcycle Club. I wanted brotherhood, loyalty, and respect. I didn't expect to find him. Thanatos. He's the devil on a steel horse and I'm falling for him. He has demons, a darkness caging him that I can't break through. If I'm not careful, he might drag us both into the abyss.

Ever since my sister was killed, I've been on a path of self-destruction. They don't call me after Death for no reason. I've slain more men than I can count, and I did it with a smile. I'm broken, destroyed, living in torment and I don't deserve one moment of happiness—until Isaac walks into my life, and I find I want all of that and more.

But my path of destruction has put my club on the radar of people who will kill us all without a second thought. I never considered the consequences of my war with them, until Isaac got in their path. Now, the only good thing I've ever had in my life might be taken from me, and there's nothing I can do about it.

Thanos is the president of the motorcycle club and a very violent and unstable individual. The painful background for both of the main characters was well written and added to the character development.

Isaac has his own painful history from his time in the military. His unhappy childhood only added to his personality development. His attraction to Thanos was difficult and a good way to develop the story.

There was some lengthy inner monologuing that I tended to skim through. It was a lot of “I can’t be attracted to X because he’s a pledge or he is the president”. Skimming those scenes didn’t seem to cause any gaps in my understanding of the storyline or reading enjoyment.

Caged in Darkness ends on a cliffhanger and I really feel like if the excessive inner monologue and had been edited more thoroughly it could have been one book instead of two.

Violence: 9/10 (this was a pretty bloody story overall)

Heat: 6/10 (being the first of two books, the storyline was mostly focused on character development and background, but the two or three sex scenes did add to the plot)

Length: 7/10 (I think if some of the inner monologue and had been removed this two book set could have been one book)

Overall: 8/10 (would recommend with caution)