#TeaserTuesday : An Exclusive Excerpt of Shaken & Stirred by A.W. Scott

I am so thrilled to be sharing an exclusive excerpt from A.W. Scott's Shaken & Stirred which releases Thursday and we'll be reviewing here on the blog.  While you wait patiently for the novella, you should really catch up on the first four books in the Club Deny Series! 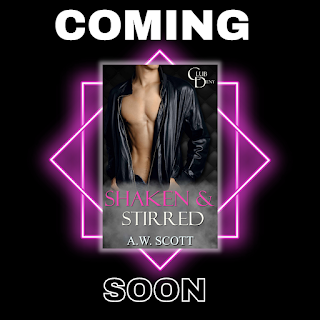 Working for Mateo Rojas had its perks. I was always paid well and on time. I had my pick of any man or woman I wanted. And I gained a group of friends that were quickly turning out to be some of the best I’d ever had.

The only downside to this place is the lack of an experienced bartender. When the boss tells me he’s got a new guy he thinks will be a good fit, I meet up with them in hopes it will come together. I had no idea it would be so much more.

My father liked to claim he was a jack of all trades when I was growing up. It was the truth. Unfortunately, that same truth got him and my mother gunned down by his bookie when I was just a kid.

Bouncing around the foster care system wasn’t ideal, but I did learn a few things. And when my bartending skills are needed by my friend Benji’s new friend, I jump at the chance to help. But like everything in my life, there’s a catch. This catch just so happens to hate my guts.

Three days. Two stubborn men. One bedroom cabin. Passion ignites when feelings are shared and these two realize their hate for each other might not be hate at all.

Club Deny follows a group of friends as they find love in unexpected ways. Each book follows a different couple. They are best read in order. This book is designed for readers 18+.

“What the hell are you doing?” He doesn’t startle this time when I bark the question his way.
No, he doesn’t move a muscle, rather he finishes what he was doing before turning to me slowly. His eyes hold a fire that wasn’t as strong last week.
“First things first, you really need to work on your people skills. I’m not a dog or a robot. I won’t take commands.” He holds up a hand when I move to interrupt him. “I will respect you if you respect me. But know this - if you decide to give me grief, then you should expect it back twice as bad. I’m a fucking terror when I want to be.”
Paula started to smile the moment Casey began to put me in my place. Now that he’s done, she looks nearly manic with excitement.
“Holy shit! This is perfect! I’ve already fallen in love with Casey. You can’t fire him.”
“I thought I had to pass a test?” Casey throws the question her way as he fixes another row of bottles. I want to butt in again to ask why he’s messing up a perfectly good system, but I refrain since I’m more interested in what Paula’s answer will be. She’s been a tough critic for all the new hires. Her allegiance to Casey could work against my goal of getting him out of here.
Paula puts down the glass she was cleaning, the rag going over her shoulder as she comes over to us. When she gets close enough, she leans on the counter, her eyes moving back and forth between us.
“There was a test. You’re right about that. But you just put old Rob here in his place so beautifully and you’ve already shown me multiple times you’re competent. All that combines to you being on my list of keepers.”
I roll my eyes at how she includes him being ornery as to why she likes him. “Why does everyone seem to like his ability to piss me off? First, Mateo. Now, you. Paula, why the change of heart?”
She whips the towel over her shoulder, whipping my shoulder with it as she scowls. “Don’t you try to give me the puppy dog eyes. You’re an asshole most days. It’s great to see someone not take your shit. It’s refreshing.”

Are you as excited as I am?  Shaken & Stirred releases on Thursday on Kindle and Kindle Unlimited and you can read my review of the first four Club Deny Books or jump right into reading them.