So Worth More by Jax Stuart (Second Chances Book 1)

I love discovering a new author as they premiere their debut novel - it means I can say I knew them when ... such is the story with Jax Stuart who offered us the chance to review So Worth More.  Sarah C. and I both got the chance to check out this amazing debut and as Sarah says, "It's so worth reading!" 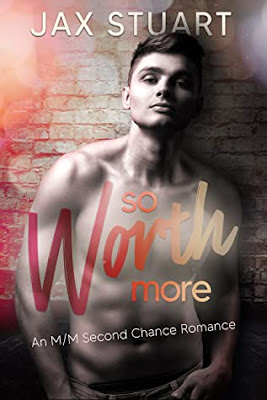 An M/M second chance romance
When Andy grows tired of Will blowing hot and cold, he realizes he is So Worth More, and ends their hook-up arrangement. He and Will try to be friends, minus the benefits. Except feelings grow between them, showing them a glimpse at what they could have together. Can Will put aside the hurt of his past and be what Andy deserves?
Sarah C.'s Review:
"This is the story of two coworkers, Will and Andy, who have been having a physical relationship for several months. However, when Andy grows tired of Will playing hot and cold, they decide to remove the benefits and try to be just friends. In my view, this is not quite a second chance romance, though it plays at the tropes. Mainly because their first relationship is not emotional. Yes, Andy has some unrequited feelings for Will, but he is aware of where they stand and never attempts to act on it.
Instead, it is a story that moves from the physical into actually getting to know one another. Into taking the time to fall in love for real. Both of these men have their own issues to overcome and we actually get to see them take those strides, something that feels incredibly rare in this genre. Love does not conquer all, after all. Hard work and working to become a better partner for your partner conquers a lot more than just love, and Stuart shows us this throughout the course of this novel.
The characters are incredibly endearing. There are a few times I want to smack Will in the head, a few times I want to smack Andy in the head, and a few times I want to smack both of their heads together but what good book doesn't elicit that kind of emotional response in its readers about its characters. And when they do finally start communicating, it is beautiful. The story and relationship between these two men is beautiful and lovely and I cannot speak highly enough about it.
So Worth More is a slow burn, medium-low level angst with a good level of spice. Stuart draws the readers in from the first moment and keeps us hooked throughout. I cannot wait to read the other stories Stuart has planned for the men in this series. I'm proud to say she has gained a new reader."
Heather's Review:

I don't normally like a book with flashbacks, but Jax Stuart won me over by making the flashbacks relevant and also some of them were hot and steamy - as Sarah mentioned, the book opens with Andy ending the hot/cold sex only deal that Will and Andy had originally agreed to, and by including the story of how they began their relationship as flashback/memories, Jax was able to not only start the story in the middle, but also give us a glimpse into how Andy and Will came to be together at all and she integrated it seamlessly - like the scene where Andy is taking his PrEP for the day and reminisced on the reason for habit:

"The condom broke."
Will sounded horrified and I sobered immediately. “Did you cum? Is that what I’m feeling?”
“Yeah, I dunno what happened.” I turned to see him putting his finger through the hole in the ruined condom.
“We were going a little rough, and maybe a little too dry?” I said softly, as he pulled on his boxers and perched on the arm of the sofa.
“Is it a problem? What’s your status? I haven’t been with anyone apart from you since my last test and I was negative. Nothing to worry about on my side.” I rushed to get out, babbling in my desperate haste to soothe him as I simultaneously pulled myself together, pulling up my pants and throwing back on my t-shirt from where it had landed on the floor.

Jax Stuart created Andy and Will to be fully rounded characters - with family ups and downs, friends and even complicated ex stories.  She integrates all of this information seamlessly as she weaves their story from Benefits to Friends to something with potential.  Nothing in the book seems forced, and despite wanting to shake the characters a few times, I found even that an endearing part of the story.
So Worth More moves up and down, from steamy to slow burn and back again.  At no point did I think that there was anything missing or extraneous in the story.  Even the side characters added the right amount of complexity and interest.  I know that so many who read this book will want a certain couple to get together soon, but honestly, I suggested to Jax Stuart that they be the last couple in the series - only getting hints and a little angst throughout the series before finally getting their HEA.  I'm going to throw another spanner in the works and suggest that I need Jonas' story on top of Charlie, James and Henry...
You need to be part of the in-crowd that discovers Jax Stuart as she becomes a household name in M/M romance, which means you need to add So Worth More to the top of your TBR.  It is live on Monday, but is currently available for pre-order.
Bonus content - Sarah C is now a Booktok'er and her first Booktok features her review of So Worth More by Jax Stuart - check it out here and follow Sarah  and don't forget to subscribe to the MMRomance Reviewed Tiktok while you're there!
5 Stars ARC KU Multiple Reviewers New Author Review Team Romance Sarah C second chance Series