Rings of Lust is Finn Dixon's debut novel featuring two Olympians at their first games.  Find out what both Tammy and Laora thought of the book and let us know in the comments if you plan to read Rings of Lust! 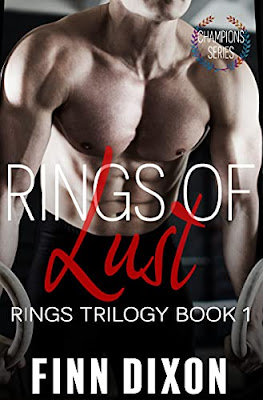 My parents had warned me a relationship would be a disaster for my gymnastics career, threatening to pull their financial support. So, I floated from one guy to the next for years.

And now, at the biggest event of my life, I found myself lonely and wanting more. And the one guy I wanted it with was Cam.

He went to the same college. He was on the same team. Just not my team.

Ugh...I had a crush on a straight guy.

''Maybe you just need to get laid?" my teammate had suggested.

Here I was, my first Olympics and all I could think about was sex. My first and only time was terrible to say the least and I was hesitant to try again. Hell, I wasn't even out of the closet either.

But the Olympic Village was pretty much a buffet of abs and glutes, and it was athletes only. Coach did tell us to loosen up. Maybe it was time to do just that...but like, naked and with another guy.

I can totally do this casual anonymous thing, right?

Rings of Lust is a full-length MM novel, the first in a trilogy, that has a cliffhanger ending and an eventual HEA, just not in this book. Be prepared for third wheel sarcasm, platypus babies, rippling Olympian muscle, and teenage sexual escapades just behind the scenes at the world’s biggest athletic event.

Laora's Review:
Camden (Cam)and Lucas (Luke) are gymnasts and are both on Team USA for the Olympics for the first time. They are both nineteen and attend the same university but have not socialized or develop a friendship before this tournament because they ate so focused on their sport. That is not to say that they did not notice each other in the training hall. Luke is out and proud gay man and Cam is firmly in the closet.
At the Olympic games they find each other by coincidence on their first try on Grindr and decide to enjoy their time as long as the games lasts. Luke especially since his parents don't want him to take any attention away from his sporting career. However the develop deeper feelings for each other, and as they are 19 and hormonal spend a lot of time enjoying discovering each other. After a few days they decide they want to continue their budding relationship after the games. They find a lot of support in their social circle, you have to love Tyler (Ty) and with Cam his mom. I loved the way how more and more couples where discovered. The 'main' guys started to think that there must be something in the water. However Luke his parents are not to keen when discover the truth. Find out what happens. Finn Dixon is a new mm author and I can say he has done well for a first book. I really like his writing style, but found the sexy/bed times a bit to much, however I can argue that being 19 and just finding a guy you are really into would explain that.
Rings of Lust ends on a cliffhanger, I presume the couple and many of their friends will find a hea/hfn in either book 2 or 3 in the series.
Laora's Rating 4.5/5 Stars

I really wanted to like Rings of Lust more. I love books about athletes and I was very hopeful for this story. Unfortunately, it fell short for me. There was a lot of extra description that was unnecessary and didn’t add to the story.

The dialogue felt forced at times and there was really good communication between the two main characters which didn't seem authentic for 19 year old boys. There was a lot of description around the Olympic competitions that didn't add a lot of value to the story of the relationship between Cam and Lucas.

Cam's reasoning for staying in the closet seemed forced considering Lucas was already an out Olympic athlete and on the same team. Lucas' Parents were definitely jerks, but it was a little bit odd considering they're paying for all of his training and supporting him to be an Olympic athlete but they don't seem happy about it nor do they want to support his goals as an athlete.

My biggest complaint is Rings of Lust ends on a total cliffhanger, and definitely not a HFN. A lot of the book is spent introducing future characters and possible relationships for them. In my opinion at least 25% of this book could've been cut out and the relationship between Cam and Lucas wrapped up within this one book.

Heat: 6/10 (decent amount of sex, but the scenes were a bit lacking in authenticity for me)

Length: 8/10 (it was too long in my opinion. There was definitely a lot of extra stuff that could've been cut out and the storyline tightened up)

Angst/drama: 7/10 (more than I would have liked. most came from outside the relationship)

Writing: 6/10 (the dialogue felt forced and unrealistic for teenagers. too much 'extra' stuff that seemed to be added to set up future books)

Overall: 7/10 (would cautiously recommend. This author has potential)