This series features a whole werewolves universe , with four distinctively different cultural groups.  Slumbering Ember is the first book in the series!  If you'd like to enter to win your own copy, please check out the Rafflecopter below! 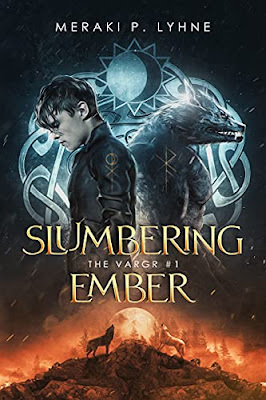 The belief in the old Norse gods may have been suppressed by Christianity, but that doesn’t mean the races of old didn’t survive. Like the Vargr wolves.

All Matt knows of his dad is that he was Danish and that he’d died in a motorcycle accident ten years earlier. When Matt’s sixteen and a half, his mother declares it important that he at least knows the other half of his heritage, so she sends him from the States to Denmark as an exchange student for a year.

Matt’s not overly excited. Matt’s a loner who doesn’t connect with people. Going to a foreign country was never a part of his plans, but he’d do it for her. He’d go to where she’d loved the only man in her life. The love that gave her Matt.

Everything he’s heard from his mom and read about Denmark and the area he’s going to live in did not prepare him for what he finds, though—a heritage that has an old Norse god on the family tree.
Laora's Review:
This is a new to me author, and was I pleasantly surprised. This is the first book in the Vargr series. This author sets out a meticulous plan for the world he is building with enough details but not overloading the reader. The author is creating a whole new way to look at werewolves. This book is very, very slow burn.
Matt (16.5 years) is an exchange student from the USA, who stays with friends from his mothers' youth and also knew his dad. His dad was Danish and has died. Mark discovers a whole new world after running into and with a group he meets at an environmental rally.
I will not be telling  more about the story, since it will spoil this read. This book ends on a cliffhanger and I personally can't wait for the following books in this series. And I also will be checking out the other books by this author. Highly recommend this series if you like comprehensive worldbuilding series which have shifters in it.
I give Slumbering Ember 4,5 *, just not 5 * because I am looking forward how the story develops further.
About the Author: Find out more about Meraki P. Lyhne by checking out his linktr.ee
a Rafflecopter giveaway
4.5 stars ARC Laora PNR slow burn