Omega from the Ocean by Amy Bellows - Audiobook Review

on September 17, 2021
Omega from the Ocean is a 77,000-word gritty, age-gap romance with knotting, light D/s, and Mpreg of the dragon-egg variety. While the ending may be an HEA for Jack and Peter, it’s an HFN for the rest of the Mermen of Rixton.
From the Author: 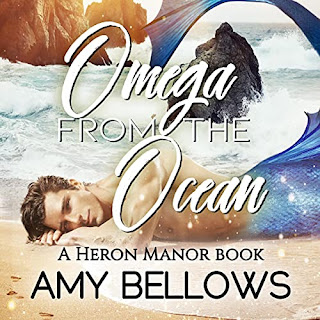 An MM Retelling of The Little Mermaid. With dragons.
Merman Jack is a terrible virgin sacrifice. Mostly because he isn’t virginal. At all.
Hopefully the Sea King won’t notice.
For Jack, the human world has too many wonderful temptations, and too many alphas to resist. He only has two months left before he has to give himself to the Sea King, and he doesn’t want to spend them in the cold, dark catacombs where the Mermen of Rixton live. It may be forbidden for Jack to go to shore, but when did that ever stop him?
Peter is a terrible dragon shifter. He can’t figure out what he’s supposed to collect for his hoard. Without his hoard, he can’t do any of the important dragon-shifter things, like take his dragon form or find his fated mate. After years of losing his lovers to their fated mates, Peter’s feeling his age, and he’s tired of being alone.
When Peter sees a beautiful merman on the beach, he thinks he’s finally found his fated mate. Jack falls hard for Peter too, but he knows they can’t be together forever. If Jack doesn’t show up on the day of his sacrifice, the Sea King will kill his father and take his brother instead.
Will the love between a terrible virgin sacrifice and a terrible dragon shifter be enough to change their fate?
Laora's Review:
The narration, by I believe, first time narrator Lance West was spot on he had a perfect cadence for me and his voices for the characters are very well done. I am looking forward to hear more audiobooks by him.
This a story written by Amy Bellows, which I read a while ago. As always, in my opinion, parallels can be drawn between the wonderful world she builds and our own world. This book is set in a world in which mermen are being exploited by their own Sea King and Seafoam/ Jack is not taking it - the story unfolds from there on. The book has a great story arc and left me wanting to know more about several side characters.
The main characters Seafoam/ Jack and Peter find their HEA.  This story features mpreg, a bit of angst,  and shifters!
Rating: 5/5 Stars
5 Stars Age Gap Audio Code provided Fantasy Laora MPreg shifter