Heather:  As I get older, I find myself judging books on whether I think they could happen in reality - would the characters behave the way they do if I met them in real life, and I can honestly say that R. Cayden creates amazing characters who I'd like to know in real life and whose story I can see really happening!  This is definitely true with their latest work, Filthy Sweet, which releases today!  I wasn't the only reviewer on our team to get a chance to ARC Filthy Sweet, so I'll save the rest of my thoughts for the full review and let you see what other opinions are out there... (spoiler alert - this was 5 stars across the board!) 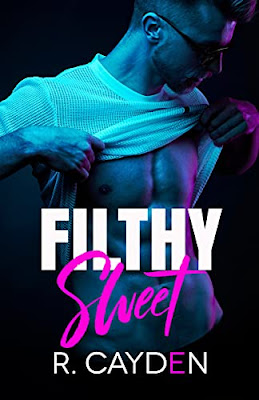 Loner. Troublemaker. Rebel.
…and secret softie?
I try to enjoy the reputation I’ve earned as a hotshot music exec, even as I’m careful to hide my checkered past.
But after another unfortunate scandal catches me with my pants down (literally), I’m forced to clean up my image.
Enter Owen: my best friend’s little brother. The adorkable sweetheart is my wholesome polar opposite, which makes him perfect for a little fake relationship publicity.
Owen’s just out of the closet. He acts shy, but the more time we spend together, the more I glimpse his surprisingly filthy imagination.
And the more I can’t stop thinking about him.
I don’t do relationships. And with my past crashing down around me, I have no right to drag Owen into the chaos of my life.
But then he says my name with his gentle voice, and something unfamiliar stirs.
Owen breaks down the walls I’ve built, but can a guy like me give him the kind of love he deserves?
Filthy Sweet is a standalone M/M romance with a naughty geek, a secretly-sweet bad boy, and a dash of fake relationship. It features forbidden, best-friend’s-brother steam, dirty talk, and ongoing confusion about a pair of panties. Enjoy!
Reds Book Reads Review and Rating:

I loved this book. Owen is just so sweet and geeky but without being over the top and Fox is a bad boy hiding a soft centre. I loved how both had issues in their pasta that made them guarded but that they were able to support each other to work through it all. I would have liked to have had more from Owen’s brother Reggie but it didn’t detract from the story for me. It was amazing how they both helped bolster each other as well and I found I just couldn’t put it down.
Rating - 5 Stars
Heather's Review and Rating:
As I said above, I want to know these characters IRL.  The story flowed naturally and drew me in immediately!  It was hot and steamy, mixed with adorably sweet.  I love the meet-cute aspect of the story - who wouldn't bond over a broken box of lingerie and sex toys - even if they did belong to Owen's best friend.,,
This book focused on the relationship between Owen and Fox, didn't get bogged down in too much angst or worry - there was just enough tension to make it believable - and pulled me along through their awkward phase, fake dating and real budding relationship to a satisfying conclusion and a HEA!
I love that Filthy Sweet is standalone and really focused on the couple, not having to worry about setting up future books or couples!  This book is going on my re-read list for when I need a sweet and steamy palate cleanser and a feel good pick-me-up!
Rating - 5 Stars
Tammy B. Aspentree EAS Review and Rating:
I loved this book so much!
Owen, the sweet nerdy pseudo virgin is just such a lovable character. He’s been focused on his doctorate for so many years he’s never had the full experience of a relationship.
Fox, Owen’s brother’s best friend and resident man whore. He’s a little bit damaged and hesitant to corrupt sweet Owen.
Of course, they decide to enter a Friends with benefits/fake relationship and the sparks start flying.  Owen’s brother Reggie is also a great character.  He’s a little bit of a dumb jock but he has a heart of gold. He wants his brother and his best friend to be happy.
Overall I thoroughly enjoyed Filthy Sweet and would highly recommend it!
Character development: 9/10 (both characters had their own voices)
Dirty talk: 10/10 (sweet little Owen has a dirty mouth in bed. Very enjoyable facet of his personality)
Plot: 9/10 (we’ll organized and paced)
Heat: 8/10 (lots of sexy naked times but not at the cost of the storyline)
Writing: 10/10 (well developed characters with believable behaviors, easy to picture)
Overall: 10/10 (would highly recommend)
Sarah C.'s Review and Rating:
This book focuses on Fox, an A&R executive with several up and coming bands and a dark past, and Owen, a 26 year old PhD graduate with very little experience but enough fantasies to more than make up for it. Fox and Owen grew up in the same small town where Fox was Owen's brother's best friend. As is common in these kinds of books, he was also one of Owen's first big crushes. R Cayden is great at writing the brother's best friend trope and this book? No different.
The two characters complement one another very well. Fox's hard edges are buffered slightly by Owen's softness and Owen's slightly sharpened by Fox, like a knife on a whetstone. They have a lot in common, though it doesn't appear to be that way at first. The fact that Fox absolutely loves hearing Owen talk about his research and different migratory patterns of animals and admits that he actually loves science? That melted me.
The plot is formulaic, but there was enough that kept me on edge and kept me interested. Especially in the stuff surrounding Fox's colorful past and how he managed to get the career that he has now. The book is also spicier than three day old five alarm chili.
Filthy Sweet is a great light read, full of great characters and a world that draws you in.
Rating: 5 Stars
5 Stars ARC Erotic Romance Friends to Lovers Heather Multiple Reviewers Reds Book Reads Review Team Romance Sarah C steamy Tammy