Sometimes you just really need a good crush story - and when both MC's have a crush on each other but neither will make a move, well... you end up with Your Only Fan! 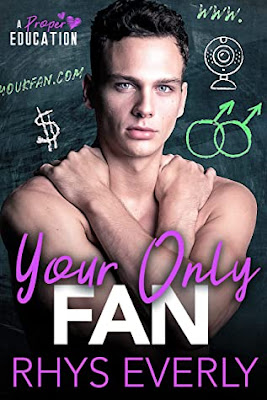 He’s an adult star. He’s my crush. He’s my student.

Ever since Ezra Dixon walked into my classroom, I knew his name, his body and the color of his eyes.

I’ve been following his YourFan account for a very long time. He’s my secret, guilty pleasure.

Until my friend messages him on my behalf. And Ezra wants to meet me to film a video for his page.

Your Only Fan is the third book in Rhys Everly’s steamy, low-angst, teacher/student romance series, A Proper Education.

First, I'll address the elephant in the room that it's ironic that this book is releasing just days after Only Fans announced that they are banning sex work and really anything sex positive on their site in the next few months, but the story is a sweet, fluffy, hopeful portrayal of a sex professional and one of his biggest fans and for that alone, its a great read.

I absolutely love the duality of these character - the professor who is so take charge and in command in the classroom and so shy in his personal life and harbours a secret crush on his student.  The adult star who appears to the world as large and in charge, but crushes hard for his professor.

Your Only Fan contains steam, fluff, fun and a touch of humour and is absolutely a low-angst read!