Whirlwind is a very sweet grumpy/sunshine story. It took a little while for me to get into it, but by the time I was about 40% it was getting good! 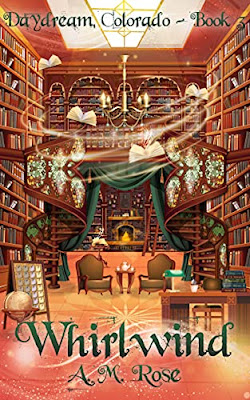 Felix had always been a relaxed, go with the flow, make no plans and see what happens kind of guy. He lived, he laughed, he spoke to ghosts. Pretty standard if you asked him. To the rest of the population? Not so much.

But once a spirit calls him to Daydream, he gets caught up in a race to find out what happened to him. The quest for answers throws him right in front of Daydream’s uptight librarian, and while riling him up is a lot of fun, the secrets unraveling in Daydream might be much more sinister than Felix expected.

Nicholas had always had a perfectly quiet, perfectly organized, and perfectly mapped out life. He got up, he worked, he spent the day ignoring the lies told around him. Anyone who envied his gift was welcome to take it. Any volunteers? He didn't think so.

When a random guy breezes into town with ridiculous claims about mysterious ghosts, Nick knows he’s telling the truth. When he finds out that the stranger might hold the key to unlocking the chest of mysteries plaguing Daydream, and Nick’s heart, he’s forced to confront a truth of his own.

Tangled together they'll try to navigate ghosts, mysteries, and feelings neither of them were prepared for.

**This book is the third in a series. It contains magical settings, cozy mystery vibes, a grumpy character falling for a sunshine one, and a whole lot of fun characters you've met in previous books. While it can be read as a standalone it's best enjoyed with the other titles in the series.

Felix is definitely a happy go lucky, outgoing, ray of sunshine. Nicholas is a buttoned up, stuffy, OCD, creature of habit. I really disliked Nicholas at first, he was kind of an a**hole. But as the story develops and we learn more about him he becomes a more enjoyable character.

I loved the mystery of West Park’s ghost and the fact that no one in daydream remembers him is intriguing and wrapped in mystery. The path the main character is Mustique to unravel the mystery is well written, well developed and has a somewhat unexpected conclusion.

Overall I enjoyed Whirlwind, I loved the way Felix tried to stay on the down low but was really bad at it. His purchasing of random items at the magic shop was pretty hysterical. I loved Emerson and I hope his and West's story is available soon.

MC development: 10/10 (well developed, each character had a distinctive voice)

World Building: 8/10 (easy to picture, some of the rules of this universe were unclear but I suspect they will be developed in future books)

Heat: 6/10 (once Nicholas finally goes in the heat level definitely rises but only enough to move the story along.)::

Humor: 6/10 (definitely had me chuckling in a couple spots)

Length: 9/10 (There were a couple short sections that seems to drag on but overall it was good)

Meet cute: 9/10 (I had my suspicions about the culprit but the story was written in a way that I was not positive)