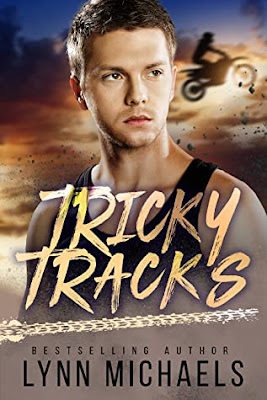 I was asked to review Tricky Tracks by Lynn Michaels and as much as I wanted to read the first three books in the series before I dove into this one, my review list was long and involved, so I chose to dive right into Tricky Tracks and see if it can be read standalone - spoiler - I think it can... but more on that in a minute...

It’s difficult enough to recover from a potentially career ending wreck, but Cole has to do it in front of a camera. Add in that the sexy videographer, Nix, has more than Cole’s tires spinning and it’s more than problematic. Facing the truth and redeeming himself for his past actions is trickier than making a good comeback for a team that doesn’t want him.

Nix Braumere is making a great career out of filming sports stars, and his friend, Jason, has him working on a Supercross documentary focusing on injuries, particularly, Cole Lindt’s. Making the hot racer the star of his show wasn’t supposed to wreck his heart. But Cole’s grouchy front obviously hides a world of pain that Nix wants to ease.

My review:
This is one of those books where I don't think you absolutely need to read the previous books in the Holeshot series to get the gist of the story, but I certainly bet that those who have read them have much deeper insight into Cole's history and the incidents that have lead to parts of his predicament and also something about his sexuality.  Lynn Michaels does do an excellent job of weaving in the tidbits you need though.
The story was well written and had a good balance of 'sport' and romance, but for me I found that the explanations regarding Cole's sexuality were a little vaguebooking and it seemed that the intense relationship that developed between the characters was a little forced, not in a non-con way, but just in that there were leaps that I had to catch up to...  I also found some of the back and forth about each other's jobs a little distracting.
I really enjoyed the motocross and team dynamics aspects of this book and truly loved the blossoming relationship between Cole and Nix.  Their HEA was satisfying and sweet.  If you like a good sports romance than you'll want to check out Tricky Tracks (and the rest of the Holeshot series)