One of my pet peeves is a book that moves back and forth through time and I often will put a book down if it disrupts the flow too much.   In the case of The Red Zone, I am so glad I stuck with it! 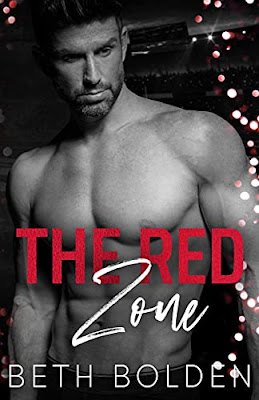 Spencer’s deep in the Red Zone and it’s time to even the score.

Nine years ago Spencer Evans became the first player out of the closet to be drafted into the NFL. Everyone believed he had aspirations to change the world but all Spencer ever wanted to do was play football for a team that accepted him wholeheartedly. But they never would, and Spencer began to conceal all the parts that made him different.

When a terrible injury forces him to re-evaluate his life and his choices, he realizes there’s only one man who can help him.

The very first gay sports agent, Alec Mitchell has given his life and his career to making queer athletes’ dreams come true. He can’t help but think of Spencer as the one who got away—professionally and personally.

Alec thought he’d buried his desperate longing for Spencer ages ago but it turns out it was just lying dormant, waiting for the right spark. When he begs Alec to take him on as a client, everything they’ve been burying for years surfaces once again.

With Alec’s help, Spencer can change everything about his life he’s come to hate. An extraordinary future—and an undeniably extraordinary man—are waiting for him. The play has been called. All he has to do is catch the ball and score.

I read the first two books in The Riptides trilogy when they came out in March and July of 2020 and honestly with my hectic reading schedule, I didn't go back for a refresh and if you are truly looking to understand and find depth in the backstory, I would recommend reading books one and two before diving into this one, but it can be read standalone if you like.

I absolutely love Spencer's transformation - I liken it to someone who has an addictive bad habit that they're trying to kick - his being the fact that he's accepted bullying and hatred from his teammates and coaches and hid important parts of himself to play football... and then waking up one day and choosing to stand up for himself and get help!

His always just below the surface non-relationship with Alec is incredibly well written and those flashbacks I usually despise were well placed and well executed,,, and fortunately when we get to the meat of the story, they stop :)

Beth Bolden has once again written characters that grab me almost from the first word and hold my attention all the way through to the HEA.  If you are looking for a long, slow burn romances between a football player and the sports agent who guides both his career and his journey of self-discovery you'll want to add The Red Zone to your tbr!

Drop by again next week and I'll have an excerpt and giveaway posted as part of the Red Zone Blog Blitz!