The Billionaire and the Escort by Evelyn Mahony 4 Stars

on August 03, 2021
Josh saves James from a fate worse than blue nail polish in a high-end bar and strikes up a conversation that leads to their first very steamy encounter between 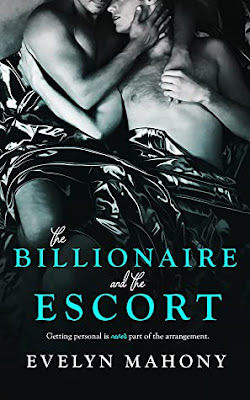 The Billionaire and the Escort...
From the Author:

In the world of high-end escorts, getting personal is never part of the arrangement.
When Josh Roberts became a male escort, there was no room for emotions. They went against the job description. He had a full appointment book and enough clients to pay the bills. There was definitely no time to get attached to an older, extremely successful, incredibly gorgeous man who paid for his services.
But Josh can’t turn down the money that has started rolling in, along with the gifts and the opportunity to live in the lap of luxury as the man flies him around the world to play pretend as his boyfriend. How on earth is he supposed to say no? Especially once he starts falling for his client.
James Barnwell is the successful CEO of Winter Luxury Resorts who stumbled upon Josh Roberts in a dark, high-end bar in midtown Manhattan. The young man was cocky, young, beautiful and offered James exactly what he was looking for—the chance to be with a man who knew the ropes and offered no opportunity to get attached. James had a lucrative business to run and meetings all over the world to attend. Having someone by his side would just weigh him down—or so he thinks, until he finds himself caring deeply for the man he pays for companionship, and it completely changes his world.
Two men are trying to play make believe—until they realize their sham might be closer to reality than they thought.

My review:
The chemistry in this book is off the charts!  From the get go, the sexual connection heats up the page and draws you into Josh and James' world.  You can see how fast their relationship evolves from escort and client to something more.  If you read this book strictly for the steam you won't be disappointed.
Where it strayed a little for me was in the roles and titles somewhat inconsistently - both characters referred to each other as sir and baby at different points in the book and somewhat haphazardly, Daddy was introduced as an honorific but not really explored.  If I hadn't gotten tripped up in the wording this would have been a 5 star read for me, but since it took me out of the book in a few places it also had to affect my rating.
As a trope, this book has that "Pretty Woman" feel about it and that alone made it an enjoyable read!  If you need a little (or a lot) of sizzle in your life, than you won't go wrong adding The Billionaire and the Escort to your TBR pile.
4 Stars ARC steamy