K.C. Wells often writes with both purpose and poise and once again, in Seb's Summer, she's done it again!  This book pairs eager and proud Seb with the older and somewhat gun-shy Marcus in what starts as a slow burn friendship and turns up the heat!

***There is an unlisted potential trigger in this book that is a also a spoiler.  If you are someone who has specific trigger worries, I recommend messaging me or contacting the author before proceeding.*** 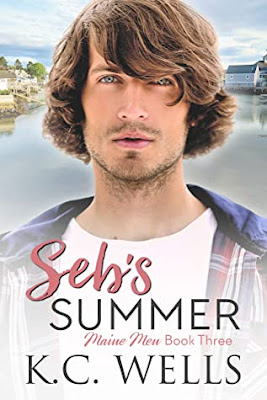 Seb Williams has one plan for the hot, sultry nights of his summer vacation—to get laid. What isn’t on the agenda? Running his uncle’s fishing business. Seb has no choice but to help his family. So it’s goodbye, Ogunquit’s gay bars and hook-ups.

Only one problem. Marcus Gilbert plays hard to get.

Cape Porpoise is exactly how Marcus remembers it from long-past childhood, and just what he needs. A sabbatical to get his life back on track, and work on his book. Peaceful surroundings. The calm of the ocean.

Perfect—until Marcus’s boat is well and truly rocked by a hot, younger guy.

Except one night leads to another, and another.

It’s just a summer fling—until it isn’t, and the pair are suddenly in uncharted waters.

Because now, Marcus’s past threatens to tear apart their future.

From the get go, I know that I love the beginning of Seb's Summer as Seb is volun-told by his mother to spend the summer working for free on his uncle's lobster boat, completely de-railing his summer plans for debauchery and mayhem...

As I alluded to in the opening of this review, K.C. Wells begins this book with an almost puppy-like Seb throwing himself at a reluctant Marcus and eventually settling for friendship... I love how the characters begin to know each other in a more relaxed setting and I especially love that this book doesn't jump to sex on page 3... that's not to say that it doesn't heat up the sheets in a very trademark Wells style eventually...

Seb's Summer takes a winding path to unexpected places and is well researched and well written.  Each of the men in the Maine Men series has had to overcome something in their stories and all are sweet with heat!  I recommend starting at the beginning of the series with Finn's Fantasy, though this can be read standalone.  I also reviewed Ben's Boss, the second book in the series here.