I was in another author's facebook group last week and they asked what sport is under-represented in M/M romance and what did I want to see.. my immediate answer was RUGBY!!!  And lo and behold, Jax Calder heard my request and released Playing Offside for our enjoyment! 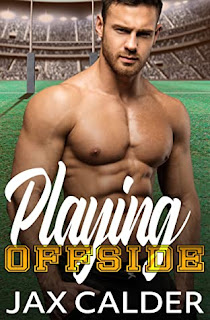 Falling for the guy whose starting spot you're after? Never a good idea.

Aiden Jones, aka the Ice King, is one of the best rugby players in the world. He got there by working hard and sacrificing a lot, including denying a large part of himself. But there’s plenty of time to be the poster boy for gay rugby players after he retires. At the moment, he’s focused on passing a long-standing points record to cement his legacy, and he’s not about to surrender his starting spot to the cocky loudmouth who just joined the training squad, no matter how talented the kid might be.

Tyler can’t believe he’s made it into the New Zealand rugby training squad after only his first professional rugby season. Now management has decided that it’s a good idea for him to room with Aiden Jones, who Tyler’s had a long-range crush on for years. And although Aiden is icy to him both on and off the field, Tyler figures with a little charm, he can melt the Ice King. But even he’s not prepared for how heated things become between them. Now Tyler’s falling for the same guy whose starting spot he’s gunning for. But all is fair in both love and sport, right?

Aiden and Tyler are adorable!  They should be enemies or at least rivals, but you can see the connection even before they can!  They have the same problem - gay men playing in a testosterone filled sport with no out gay players and neither one of them wants to be the first.  Aiden knows that he'll come out after he retires, but that's not going to be for a while - he's at the top of his game.  Tyler has more to battle than just his sexuality and that brings a bit of angst and tension to the book - just enough to build to the inevitable crisis before the HEA.

This book follows the typical M/M sports trope, but does it well and with sweet humour and of course Rugby!  It was a sweet with heat easy read and just enough tension to keep the story moving.  If you're looking for a sports romance with hot guys than Playing Offside is exactly what you are searching for!