on August 09, 2021
Glass Wolf is the debut novel by new author Cameron Craig. It is a sweet story of faded mates, shifters, magic, and mystery.
From the Author: 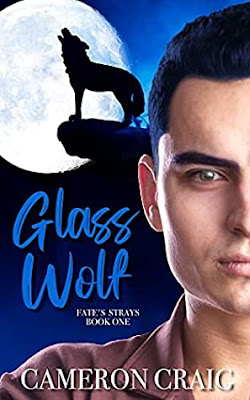 Glass Wolf is the tale of a young wolf shifter looking for his place in the world, and a disgraced royal mage searching for absolution. This is the story of the two of them finding love, redemption, and their way in the world. This book features on page adult situations, but also contains fluff, romance and a wagon full of sass.
Jaxon:
I have never been allowed to experience the world, never been allowed to figure out who I was without my family setting their expectations on me. I was the treasured omega of my father's clan, and I was expected to behave as such. Naturally that chafed a bit. I know my family loves me, and they only had my best interests at heart. But I wanted more in life. So I found myself using my limited freedom to stalk an attractive older man in town, and when he turned out to be my fated mate, I learned that my life's adventure was only beginning.
Thomas:
He's back again, the handsome young man in the window who was quickly becoming the star of my dreams. I wanted to talk to him, wanted to get to know him, but I was afraid. I was afraid that if he found out that I was a disgrace, he wouldn't want me. I was afraid of opening my heart again. But the fates were kind to me, and this young man was my Treasured One, my fated mate.
But now I had to keep him safe while helping the King of Quillan root out a traitor in the Royal Court. Was I prepared to go back to the scene of my disgrace with my Treasured One in tow? The fates only knew.
My Review:
This book features: Virgin Wolf, Age-Gap, Hurt/Comfort, Role Reversal, Fated Mates, Found Family, and Insta-Love
The story is sweet if a little bit predictable. The premise is not unusual but this is definitely a new take. The fact that a young omega wolf shifter has a fated mate who is a mage is a little bit different than what I have read before.

Jackson, the young omega wolf shifter, is set up as a naïve, inexperienced, sheltered character. But I found that he was somewhat aggressive and pushy through most of the book.

Thomas, the disgraced mage, is set up as something of a tortured soul, misunderstood character. In reality he’s not disgraced, he chose to leave the real court after a terrible accident.

Things I normally expect from omega verse were missing. For example slick production in the omega, knotting (although, since he’s mated to a mage and not another shifter that could be the answer but it was never explained that way), and claiming.

Character development: 4/10 (both characters felt a little bit one dimensional to me, but in this relatively short storyline that’s somewhat to be expected)
Plot: 6/10 (very predictable)
Mystery: 3/10 (no surprise or twist in the discovery of the villain)
Blurb story match: 6/10 (again, the character of Thomas isn’t really disgrace and Jackson isn’t really naïve or sheltered)
Heat: 7/10 (enough sex to make it steamy)
Writing: 5/10 (definite room for improvement, but strong potential)
Fluff: 9/10 (definitely a very sweet story, the bond between Jackson and thomas is dedicated and lovely to read)
Overall: 6.5/10 (if you like sweet stories, fluff and books where the two main characters don’t have conflict between them then Glass Wolf is probably a good choice for you)
3.5 stars ABO ARC Fated Mates New Author PNR Romance steamy