Down and Dirty by Parker St. John 5 Stars (Down Home Book 2)

Y'all know I'm a sucker for a cowboy and add in a second chance romance and you've got me hooked... Well, Down and Dirty features a Rodeo Bull Fighter, a ranch foreman with a bull riding past and a lot of soul searching which makes it a fabulous 5 star read!  It's the second book in a series but can easily be read standalone.

One kiss ended in tragedy. 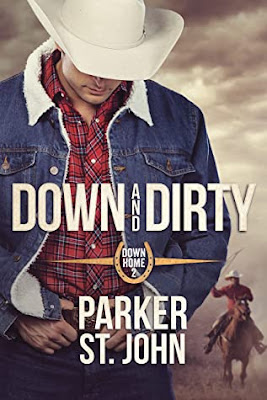 Now they have a second chance to do it right.
Lane:
Bull fighter. Heart throb. Wild card.
Rodeo pro Lane Bell knows a thing or two about taking damage.
He’s made a career out of punishing himself, but he can’t outrun his troubled past. Not when it shows up in an irresistible package to spring him from county lock-up and demand he come home.
Denver Reed is rugged and ripped, with a voice like smoke and eyes that watch every move he makes.
Lane fell hard for him once, but never again.
Because Denver is straight.
Denver:
Bull rider. Mystery. Legend.
Denver Reed has never known anything but denial.
He once set the world on fire on the back of a bull, but his chance at fame is long gone. Because when Lane took off, it was Denver who sacrificed everything to clean up the shattered mess he left behind.
Denial has kept Denver alive all this time.
Denying what he feels for the sinful bull fighter with the lightning eyes and quick grin. Denying the fact that he craves Lane more than air to breathe. Denying his very nature.
Because Lane already broke his heart once.
He can’t survive it a second time.
My review:
Told mostly from Lane's POV, the book meets Lane at a low point in his career - hurt and hurting - that provides the opportunity for the author to throw him back together with Denver.  Without spoiling the story, this isn't the last time they'll need a push to see what's been in front of their faces for years and the story, though dealing with their emotions does require the characters to revisit the death of Lane's brother and other past issues.
Down and Dirty has angst and struggle from the first to near the last page, but what do you expect from a pair of world weary cowboys who need their HEA.  This book is well written, well edited and flows incredibly well - I read it in one sitting and loved every minute I spent with Lane and Denver.  Lane features as Cal's best friend in Down Low, the first book in the series if you want to get some back story on him, but I honestly think this is a standalone standout if you want to just grab this bull by the horns and add it to the top of your TBR.
5 Stars ARC Romance second chance Series