Back Check by RJ Scott and VL Locey

When a book starts out with angst, you know you are committed to reading it through.. and Back Check starts with the worst kind of angst - a child with cancer... luckily you know that all romance books have a HEA... 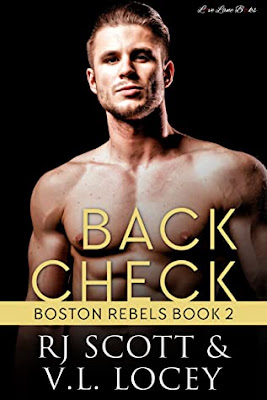 Meeting Joachim could save his daughter’s life, but it may well cost Isaac his heart.
It’s been one hell of a year for Joachim Löfgren. After a long summer in rehab, he’s been moved to a new town, one far away from the warm Florida sun he so adores, to bolster a struggling Boston defense since the departure of their beloved team captain. He hadn’t even unpacked his skates properly when fate lands another blow, and he’s told that he is dad to a gravely ill child he never knew existed. It’s an easy decision for the burly defenseman to help and he opens up his   home to his child and her guardian Isaac. He’s instantly enchanted with the preschooler as well as her uncle and decides that his life will only be complete if his daughter is part of it. Filing for custody is the only option he feels he has, but this throws his budding relationship with Isaac into utter chaos. The two men soon find themselves on opposite sides of the courtroom as they both fight for the life they feel is best for Sophia.
Despite grieving for the loss of his sister, Isaac doesn’t hesitate to take on the responsibility for his newborn niece Sophia, creating a brand new family of two built on love and laughter. He has a steady income painting pet portraits during the day, but it’s the subversive and satirical cartoons he draws at night that silence his thoughts in the dark. They don’t have much as a family, but he is Sophia’s dad now, and nothing and no one will ever come between them. When a routine pediatric checkup shows that Sophia is ill, it forces Isaac to confront every one of his fears. Finding a matching donor is her only hope, and Isaac begins the journey to find Sophia’s mysterious father. There are no names or dates in his sister’s battered journal, and all Isaac knows is that he’s looking for a hockey player who was nothing more than a one-night stand. Little does he know that finding Joachim could destroy everything.
My Review:
I normally really like when these two authors come together to give me a beautiful hockey romance, but this time it feels like they gave me a hockey angst story with a rushed HEA.  I struggled a little with my review of this book, because I really like Joachim and Isaac and I think they make a cute couple.  Sophia is adorable too, but I feel that the cuteness from the beginning of the story wanes significantly as she starts using more adult language at 2 years old...
The flow of this book was interrupted for me a few times and I have to say that while it had good realism in depicting a recovering alcoholic, Joachim's cluelessness seemed forced in some places just to create angst and then you end up with a HEA that smooths everything over.  I loved Isaac and Sophia as characters and had to keep going so that I found their HEA.
That being said, I think it's an important part of the Boston Rebels story and if you are following along in the hockey continuum that RJ Scott and VL Locey have developed you will want to read this book just to keep the story going.
4 Stars hockey Romance Series sports