I have been following the Princess Pen Pals Series for a while and when I needed a refreshing break between longer ARC books, I immediately gravitated towards the latest incarnation, book 5 - XOXO, Fisher that released last week.  All of these books feature Age Gap Daddy/Little Stories with varying levels of lifestyle.  They are all shorter stories with HEA and really sweet littles! 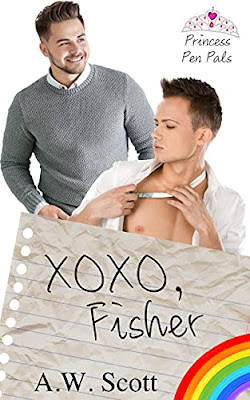 He needed someone to believe in him...

Fisher struggles to find a place to fit in. With a slew of new friends, he still can’t figure out where he belongs. Deciding school may hold the key to his future, he enrolls in a few short-term classes to see what will catch his interest.

Xander’s parents were devastated when he decided to go into teaching instead of medicine like they’d hoped. To appease some of their heartache, he worked hard for his doctorate. With his degree in hand, he began teaching at the local community college until a spot opened at the larger university.

What Xander never told anyone was that he’d taken a side job teaching young children in foreign countries online. He created fun videos and sing-a-long songs for them to learn to. It’s where his heart flourished most.

When a student of his discovers his secret, he worries the young man will tell everyone. He didn’t expect the student to be excited for him, nor did he think the encouragement from someone else would make such a big difference in his life.

This story features a clumsy Little who is obsessed with all things water and a first-time Daddy who finds himself on the other side of the student-teacher dynamic.

My Review:
I needed the sweetness from this novella in my life!  After reading some amazing ARCs in the past few days, I was daunted to take on the last one for today and needed to spend a little time with Fisher and his new Daddy!  Even being short, A.W. Scott continues to build dynamic characters who and make us want even more from the Princess Pen Pals series!  Of course the teaser is that our newly met side character, Neil won't get his HEA until after Grayson's book comes out in September!  If you are looking for a refreshing Daddy/Little story featuring some mild ABDL, you are going to want to read XOXO, Fisher - but I highly recommend starting at the beginning of the Princess Pen Pals Series with Aster's book.
5 Stars ABDL Age Gap BDSM Daddy