Wicked In Wranglers by B.A. Tortuga 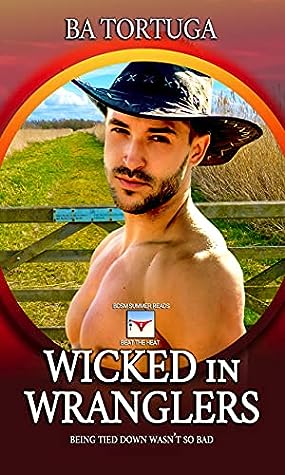 Sometimes you need a hot cowboy romance... and if you do, you really need Wicked in Wranglers

When Terry DeWitt heads to one of his favorite hole in the wall bars in Vegas, he’s riding high from a great season of bull riding. Which is a huge reason it’s such a shock when he runs into Matt Stephenson there, signing autographs on some kind of beefcake calendar. Matt is his one that got away, more like the one who ran away from all the things Terry wanted to do with him, and while Terry is on top of the world, it looks like Matt has hit rock bottom.
After a life-changing injury ended his bull riding career, Matt did his best to leave that whole world behind and make the best of what he had left. He’s been living in his truck and making money off his good looks, and when he sees Terry again, he decides one night will be enough to show him what he missed all those years ago when he was afraid to let Terry love him like they both needed.

One night is never enough, though, and when Terry takes Matt home with him, they have to decide how this new relationship will work, how to get Matt out from under a bad boss, and just how wicked they can be while still making a life together.

My Review:
Some stories jump right into the good stuff... B.J. was restrained enough to wait until after a beer and until Terry and Matt got back to Terry's hotel room, but then all bets are off! If you are looking for hot kinky cowboys than this is your new go to read! Make sure you're in air conditioning tho, because Hot doesn't begin to cover it!